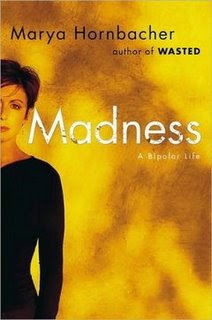 Madness: A Bipolar Life is a riveting memoir about the most severe form of bipolar disorder called: Rapid Cycling Type 1. She describes her struggles with the demons she faces every day, wavering between madness and deep bouts of depression.

As early as the age of 4 Marya Hornbacher was unable to sleep and night and talked endlessly. Once she was in school, other children called her crazy. By the age of 10 she discovered alcohol helped her mood swings, and by age 14, she was trading sex for pills. In her late teens, her eating disorder landed her in the hospital when her weight fell to just 52 pounds. She also cycled into another body obsession, cutting. In and out of psychiatric hospitals numerous times, she was 24 before she was accurately diagnosed as Bipolar.

Hornbacher, 34, is the author of (3) books. To me it would seem impossible to be able to write (1) book never mind (3) with this disorder as horrific as she describes. In the end, however, this was a satisfying, page-turning memoir. In addition, the book includes a detailed resource section with statistics and information on bipolar disorder.