36 - The Writing on My Forehead; Nafisa Haji 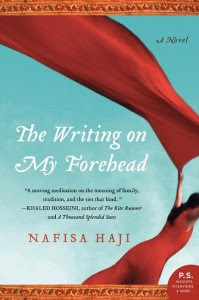 The Writing on My Forehead


In this story, protagonist, Saira Quader is a second generation immigrant of Indo and Pakistani descent, who lives in California with her traditional parents and her older sister Ameena. While trying to honor her Muslim roots, Saira's free spirit and rebelliousness, has her wanting more out of life.  Influenced by a great aunt who was a literary scholar, Saira wants to go to college,  She chooses a non traditional career as a Muslim-American journalist.

(p.40)..."It had never occurred to me to wonder why we visited Pakistan and never India, where my mother and father were actually from.  Now I knew, that Mummy had forsaken her country because of her anger at her father. That breaking ties with him, she had also broken off wit the rest of her family."

(p. 146)...."I came home from that summer in Karachi and London--head swimming with the voices of a reconstructed past, full of self-importance I couldn't wait to share --only to find my family had been arranging the future in my absence  Ameena's future at any rate."

The story spans a period of about twenty years and spans three continents. The story is told through flashbacks of Saira's childhood, and by doing so the reader learns about some family secrets and scandals.  These secrets are what seems to give Saira the permission she needs to live her life the way she chooses.  It is also these secrets which seem to bring her closer to her family.

MY THOUGHTS -  This was an impressive multi-layered, debut novel.  Its themes are universal: a coming of age story that addresses mother-daughter relationships, a story about family ties, and family secrets, and it is also a story about immigrants and about spirituality too.  The writing is simple, yet fresh and vivid, and the story unfolds in an appealing way. What I enjoyed the most about the book was that I was able to learn more about an unfamiliar culture in the process.  The novel moves easily between past and present, and the overall message is clear -- no matter where your life takes you, your family and your culture always remain and important part of who you are.

The only issues I had about this book, were the fact that the last quarter of the book seemed a bit too rushed. I also would have preferred a bit more focus on the protagonist herself. Despite this, I still really enjoyed the story, and I was happy I had an opportunity to read and review this book.  If you enjoy multi generational stories, and books about other cultures, then you would most likely enjoy this book as well. RECOMMENDED - (4/5 stars)

(About the Author)
Nafisa Haji was born and mostly raised in Los Angeles—mostly, because there were years also spent in Chicago, Karachi, Manila, and London. Her family migrated from Bombay to Karachi in 1947 during Partition, when the Indian Subcontinent was divided into two states. In the late 1960s, Nafisa’s parents came to the United States, shortly before she was born, in order for her father to study engineering at Stanford. When she was six years old, they stuck with their original plan of “going back home” and moved to Karachi. In less than a year, they knew that they had become more American than they realized and came back to Los Angeles.

Nafisa studied American history at the University of California at Berkeley, taught elementary school in downtown Los Angeles for seven years in a bilingual Spanish program (she speaks Spanish fluently), and earned a doctorate in education from the University of California at Los Angeles. With an unfinished novel left long behind, she seized upon the birth of her son—when she decided to stay home full-time—as an excuse to go back to writing, learning to use nap times and weekends very efficiently. She started writing short stories at first, which then developed into an idea for a novel. She now lives in Northern California with her husband and son and is currently working on her second novel. Nafisa maintains close ties in Pakistan, traveling there regularly to visit family.