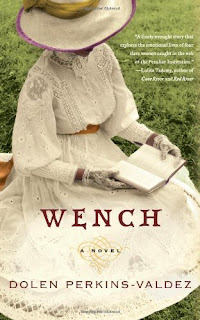 Set in the unsettling times of the 1850's, Wench, follows the lives of four slave women: Lizzie, Mawu, Sweet and Reenie.  Each summer for a few weeks,  the Southern white masters of these young women take them away from the hardship of plantation life to Tawawa resort, a summer retreat located in the free state of Ohio.  It is here that the slave women get to dress up in the cast off dresses of the white women from the previous year, when they attend a dinner dance with their master. The slave women come from different plantations, located in different states,  but they quickly develop a friendship and loyalty toward one another.

The story is told though the eyes of Lizzie, the central protagonist. Lizzie has been a slave since she was 13; she is now 23. She and her Master Drayle have had two children together.  She is the most accepting of her situation, and most of what we learn is her story, and how she is treated by both her master and his wife. The other slave women are not as accepting. There is Reenie, who is older and seems wiser than the others, Sweet, who is a very soft spoken and gentle woman, and Mawu, who is a new slave to the group this year, and she is somewhat of a rebel. It is Mawu who talks to the group about the possibility of escape.

One of the most touching parts of the story was a scene where the slaves were given temporary freedom to go to Dayton, Ohio for the day. It was here that they realize that not all African Americans, are chained or so closely monitored. The women long for this kind of freedom they have witnessed, but what would be the price they would pay?  Without giving away the ending or too much else for that matter, I'll just say that the way the story ended was not what I was suspecting, but I was satisfied.

MY THOUGHTS -  I was surprised to learn that although Wench is a fictional story, it is based on an actual place where plantation owners would bring their slave "wenches" in the summer.  The resort was finally sold, and later became the first black college, Wilberforce University.

The author did an amazing job creating memorable, and vividly portrayed characters that will stay with me for a long while. So is the case for other aspects of the novel: like the pain, anguish, physical and sexual abuse some had experienced.  It is a story that brilliantly detailed the complexity and emotions slave women experienced during this awful period of America's past.

HIGHLY RECOMMENDED - (4.5/5 stars)
(Final Copy was sent to me by Harper Collins for review)
Posted by (Diane) Bibliophile By the Sea at 9:51 PM