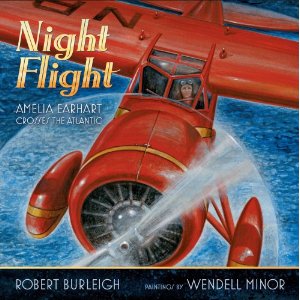 Night Flight is a wonderful biographical picture book which details Amelia Earhart's solo transatlantic flight in May of 1932.  The flight began in Harbour Grace, Newfoundland on a red Vega plane.  The story of this courageous woman, and her love of trying new things will be etched in the reader's mind.  Whether it was roller skating, riding roller coasters, or horses barebacked, Amelia wasn't afraid to try new things.

In vivid detail, the author descibes the "shimmering clouds", "mountains like wrinkles in the earth" and cities which appeared like "toy blocks" while she flew high in the sky.  Her flight was not an easy one as she found herself caught in a raging storm, and the engine of her plane grew "slugglish".  Some may ask, why would a woman in the early 1930's do what Ameila Earhart did? "Because, women must try to do things as men have tried".

The story is well-written and educational, and one that should stay with the reader. The illustrator, Wendell Minor has won numerous awards for dozens of picture books. The vivid blue sky, red Vega plane and billowy clouds will stay with me.  This book should be a part of school and public library collections everywhere.
Posted by (Diane) Bibliophile By the Sea at 12:01 AM