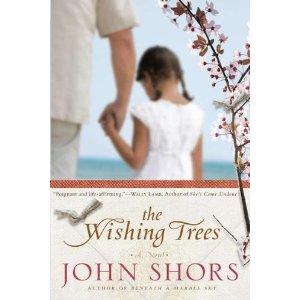 tells a story of  love, loss, grieving and moving on.  Ian and his young, ten year-old daughter Mattie, are mourning the loss of Kate, Ian's wife and Mattie's mother.  In the months preceding her death, Kate wrote letters which she hoped would bring comfort to Ian and Mattie after she had passed.  As Ian's birthday approaches, he discovers a box of film canisters letters, and letters.  In the letter that she has instructed him to open first, Kate sends her love to Ian, she tells him what he meant to her, and how much she loved both he and Mattie. She urges him to take their daughter on a trip to Asia, retracing the places where the two of them traveled some fifteen years earlier; the places where they fell in love.

Ian and Mattie do what Kate requested, and the two journey to various Asian countries:  Japan,  Hong Kong, Vietnam, Nepal, Thailand, India, and Egypt.  On their journey, they follow a Japanese tradition of leaving paper "wishes" hanging from  trees. The "wishes" come in the form of notes, poems and drawings, and serve as a way, from them to connect with Kate.

Along their journey, Ian and Mattie connect with many many people who share their wisdom and help them deal with their grief and aid in the healing process.  Their journey is not only a way to remember Kate, but it serves it helps them to create their own new memories in the process.

I loved the way the locales throughout Asia were so vividly described. I felt like I visited the Taj Mahal myself. The novel read in some ways like a travelogue, yet the reader easily sees what Kate's intentions really were. She helps the two people who she loved the most to deal with their loss, and to begin the healing process, by creating new memories to treasure.

I liked this novel, because the writing was wonderful, and I enjoy stories that help others to deal with their grief.  In this story, I occasionally felt like it was overly sentimental, and while I did like the novel, I wished I gotten to know a few of the people who helped Ian and Mattie along their journey a bit better. Despite this it is still a worthwhile read.

As with his previous novel, Dragon House

, the author has designated that a portion of the proceeds from each novel sold will go a worthwhile charity. Mr. Shors has chosen the "Arbor Day Foundation", as his charity of choice for The Wishing Trees