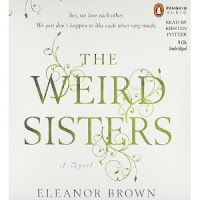 After reading many rave reviews of this book, I decided to try it for myself; unfortunately, I was not as impressed.

are Rosalind (Rose), Bianca (Bean), and Cordelia (Cordy) Andreas. Their father is emotionally distant and obsessed with Shakespeare, even insuring his daughters were named after women from Shakespeare's plays. When the going gets tough, Shakespeare becomes even more important to him.  He teaches at the university in Ohio. The family still lives in the home where the sisters were raised.  When the mother finds out she has breast cancer, the sisters return home, supposedly to support and care for her through her surgery, radiation, and chemotherapy. However, the women also have their own issues, and reasons for returning to their small hometown.

Each of the sisters bugged me in some way. Bianca was so self-involved, manipulative and annoying throughout most of the story; a constant complainer. Her need to project some sort of an image even caused her to embezzle from her employer.  Cordelia was a free spirit who dropped out of college and traveled from place to place, and had a number of men in her life.  Rose, is controlling. She was the responsible one who took it upon herself to be the caregiver, and even as a child seemed to take on more of a mother-role to the family. She sacrifices her own dreams as a result. Without going into details, throughout the novel things happen, and through a process of self discovery the sisters change, and the support of family is what helps them through all their life struggles.

There is a lot going on in the story: cancer, pregnancy, embezzlement, love and much dysfunction. What I did not like about this story was constant quotes from Shakespeare; it really got on my nerves after a while.  I also thought the writing fell flat at times, parts of the story were conveniently contrived, and the ending seemed too rushed (although I was anxious for the book to end). I found the writing style, first person plural, a style rarely used, was tough to get use to but it was clever and effective conveying the viewpoint of all of the sisters. I truly understand I am in the minority here, but this is one book that I will not be encouraging others to read.
Posted by (Diane) Bibliophile By the Sea at 8:17 AM