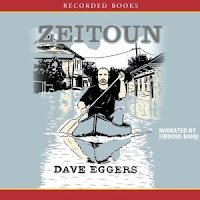 , is a true account of one family's ordeal following hurricane Katrina. Abdulrahman Zeitoun was a middle-aged , Syrian-American, father of four, and successful business owner. He is married to Kathy, who helps her husband with the customer relations end of the painting business, while caring for the children. Kathy was born and raised in the US and converted to Islam after her first marriage ended in divorce.

On the Friday before Katrina made landfall, Kathy and the children leave the area to stay with some of her relatives. Zeitoun, insists on staying behind, to watch over their home and business. When the storm hits on Sunday August 28, 2005, Mr. Z. hurries to do what he can to move their most valuble possessions to a higher plain, and then he sets out on a mission to help others in need. He belives he is doing God's work. Zeitoun and a buddy travel through the streets of New Orleans in a used metal canoe, rescuing some elderly folks and feeding dogs left behind by their owners. Then, in the midst of this disaster, something shocking happens. Six armed military officials show up at his home, and Zeitoun is taken away in handcuffs. While he thought they were there from FEMA to help him, they had other ideas. He is suspected of being a terrorist. For the next week, he is unable to call his wife, and his family fears that he is dead. By the time he is finally released from the horrible place he was detained, he had lost over 20lbs, and was in sad shape. His wife also suffers severe after effects from the ordeal.

If this isn't bad enough, the book also details numerous examples which demonstrate how inept those in charge really were, and the waste and inefficiency which resulted.  I can't even imagine, the extent of the emotional pain which resulted for those who were there and somehow survived, or for others who lost loved ones.

This review is based on the audio book. The story itself was fascinating, but yet the way it was told seemed choppy. It was, howver, an eye-opening account of one man's experience during hurricane Katrina. It reinforces what most of us here in the US are already know -- the handling of Katrina was a complete disaster.
Posted by (Diane) Bibliophile By the Sea at 10:32 PM