The Days of Abandonment; Elena Ferrante 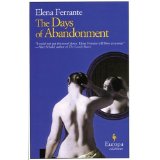 Lately, I've found myself returning to authors that I've enjoyed in the past. Elena Ferrant is one of these authors.  Here is my review of her book, The Lost Daughter, in case you missed it previously. In The Days of Abandonment, the title pretty much says it all. A short novel (188 pages)  but, with a story, and an intro  that packs a wallop.

"One April afternoon, right after lunch, my husband announced that he wanted to leave me.  He did it while we were clearing the table;  the children were quarreling as usual in the next room, the dog was dreaming, growling beside the radiator.  He told me that he was confused, that he was having terrible moments of weariness, of dissatisfaction, perhaps of cowardice.  He talked for a long time about our fifteen years of marriage, about the children, and he admitted he had nothing to reproach with us, neither them nor me,  He was composed, as always, apart from an extravagant gesture of his right hand when he explained to me, with a childish frown, that soft voices, a sort of whispering, were urging him elsewhere.  Then he assumed the blame for everything that was happening and closed the front door carefully behind him, leaving me turned to stone beside the sink."

What follows is the story of a 38 year-old wife and mother with two young child who begins to unravel, losing all sense of normalcy in life with this unexpected announcement by her husband Mario.  Of course, Mario’s confusion is just an excuse, as there is a 20 year-old woman in the picture which is revealed early on. The new woman is actually a student Mario had once tutored, and then began to see on the side.  He told his wife the affair was over, when in fact it was still going on.

Olga was once a writer, but she traded her dreams of becoming famous for marriage and motherhood, and after 15 years of comfortable routines,  she finds herself totally helpless with what has just happened.   Once Olga kept a spotless house, cooked gourmet meals, her home is now in shambles, her children  and  even the family dog , Otto are neglected. She spends her time in desperation, writing  letters to her husband – not even knowing where he is staying.  She spends a lot of time analyzing what and when things started to go wrong in their marriage. She experiences, many of the stages of “death and dying” –denial, anger and rage, a bottomless pit of depression before she moves on to the final stage of acceptance.

She has a hot and heavy sexual encounter with an older man, Carrano, who lives in her building, which could shock some readers. It’s descriptive, complete with foul language and some remorse afterward.  A sad incident involving the family dog occurs, and there is incident when Mario comes over to see the children and she invites him to stay for a meal that really left me chuckling. After several months of watching her own life spiral downward, Olga gradually begins to accept the fact that life as she one day new if will never be the same.

This sparse book was so well written. It was translated from Italian, and the words just flowed so well.  It’s an additive read, told from Olga’s  point of view, which worked perfectly; she was a believable protagonist The story’s ending was hopeful . I invite you read this book, and to go inside the mind of,   “a woman scorned. “
Posted by (Diane) Bibliophile By the Sea at 11:29 AM