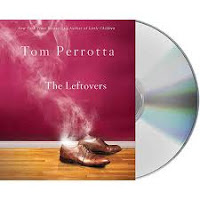 
The Leftovers is a story about the people of the town of Mapleton, who lost family, friends, neighbors and other loved ones when one day they suddenly just disappeared.  It wasn't just some people from this town, but millions of people around the world were also affected.  Their "sudden departure", leaves many believers of the Rapture phenomenon who were left behind stunned and wondering, why the departure seemed to be random. The departed included, non Christians, and non believers alike, while many of the believers found themselves among the "leftovers", here on earth.  Now that everything has changed, those who remain are left to carry on with their lives.

The story begins a few years after the Rapture, with Kevin Garvey, Mapleton’s new mayor, trying to help the members of his town to heal. Yet on the home front Kevin's own life is crumbling. His wife, Laurie, has left home to join a cult called the Guilty Remnant, a group whose purpose is to remind people that the world is coming to an end.  His daughter Jill, once a straight A student is also floundering. She gets involved with the wrong gang of kids at school and her grades begin to fail. Son Tom, decides to drop out of college to follow another cult leader named Holy Wayne, who has multiple young wives.  Even Kevin finds himself confused . He becomes somewhat obsessed with a woman by the name of Nora Durst, who lost her entire family to the "sudden departure", and who can't seem to understand why she was a "leftover" forced to start her life over without them.

Despite the religious overtones, this story really wasn't about religion at all, in my opinion.  As the stories of these people are entwined, it is interesting to see just how each person emerges from their situation in different ways. Each just trying to find a new life that will work for them given what has happened.  I liked this book, but didn't love it. It was definitely thought provoking, and I was glad that I read it.  The audio book was read by Dennis Boutsikaris, one of my favorite narrators. He did a terrific job. The Leftovers, made me think about how much of what some of these people experienced was not so different from losing a loved one unexpectedly, or why when one person dies in a serious car crash, another person in the same car has their life spared. Tom Perrotta has way of making readers think about the big picture in his novels, there is always something to ponder after the final page is turned.
Posted by (Diane) Bibliophile By the Sea at 6:58 PM