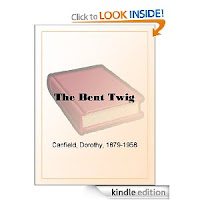 "Like most happy childhoods, Sylvia's early years lay back of her in a long, cheerful procession of featureless days, the outlines of which were blurred into one shimmering glow by the very radiance of their sunshine.  Here and there she remembered patches, sensations, pictures, scents: Mother holding baby sister up for her kiss, and the fragrance of the baby powder--the pine-trees near the house chanting loudly in an autumn wind--her father's alert face, intent on the toy water-wheel he was setting for her in the little creek in their field--the beautiful sheen of the pink silk dress Aunt Victoria had sent her--the look of her mother's steady, grave eyes when she was so sick--the leathery smell of the books in the University Library one day when she followed her father there--these were the occasional clearly, outlined, bright-colored illuminations wrought on the burnished gold of her sunny little life.  But from her seventh birthday her memories began to have perspective, continuity.  She remembered an occasional whole scene, a whole afternoon, just as it happened."
Posted by (Diane) Bibliophile By the Sea at 12:06 AM