The House of Tomorrow; Peter Bognanni 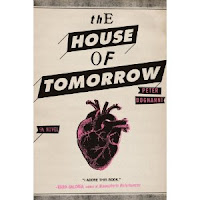 Sixteen year old Sebastian Prendergast is not your typical teen.  He's been an orphan since both of his parents died in a plane crash when he was just six years old.  Sebastian has lead a sheltered life ever since, living in a geodistic dome in Iowa with his elderly and somewhat eccentric Nana Josephine.  His Nana does not believe in  public school education; she thinks its "myopic and wrong".  As a result, he is home schooled by Nana using the teachings of a futuristic 20th century philosopher.  Nana believes its up to Sebastian to save humanity.

To supplement Nana's pension income they give tours of their dome, and run a little gift shop inside as well. One day while the two are giving a tour, to the Whitcomb family (mother and teenage son), Nana suffers a stroke and is hospitalized. The Whitcomb's bring Sebastian out from his bubble dome and into their home. It is here that Sebastian experiences a new kind of family. Janice,is  a newly separated mother; she has a teenage somewhat misunderstood, brat of a daughter, Meredith. She also has a son, Jared about Sebastian's age. He has medical issues and problems of his own. It is here that Sebastian gets to experience some of the things teens at that age face: smoking, rock music, the opposite sex. A fun coming of age novel.

This debut author did a terrific job creating a believable character in Sebastian. His depictions of situations and the boys reactions to the outside world seemed accurate and appropriate.  In some ways he even reminded me of the boy in A Curious Incident of a Dog in the Night Time, even though Sebastian was not autistic. This novel is laugh out loud funny at times, as Jared and his sister are not your ideal role models by any means. Somewhat social misfits themselves, they too long for acceptance and friendship.  Even though at times I felt sad for some of the characters in this novel, ultimately, the story left me hopeful, and wondering if a sequel might be someday in the works.

A few other blogger reviews for this novel can be found here: Booklady's Blog; Book Chatter and The Crowded Leaf.