The Grief of Others; Leah Hager Cohen 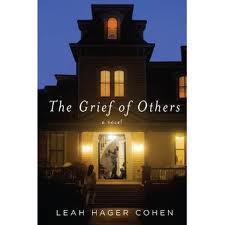 The Grief of Others is a heartbreaking story about the death of a newborn, and how such a loss affects the entire family.  Ricky and John Ryrie's newborn son dies just days after birth, as a result of a serious birth defect. While this situation in itself would be painful enough to deal with, for the Ryries the situation is made worse by the fact, Ricky knew her risk was high for having an infant that might not survive, yet she chose to keep the info to herself, just in case the tests, indicating the possibility of a rare brain deformity, were wrong. She ignores the radiologist's statement that most couples in this situation would opt for an abortion -- for Ricky this was never an option.

When John finds out about the secret Ricky had been keeping from him, their marriage becomes more unstable. To complicate family life even more, while both husband and wife are trying to deal with their own emotional pain and grief, their two other children are dealing with painful situations of their own.  Their thirteen year-old son Paul, is being picked on by school bullies and daughter, Elizabeth "Biscuit", is a mess as well. The 6th grader, cannot understand why her baby brother baby never came home from the hospital. She even attempts a strange funeral ritual for the baby whose life ended before it began.  Sadly, neither child feels like they can count on their parents at this time for answers or comfort, since they are dealing with their own grief.  In addition. there are also two other fairly significant characters who come into the story, both in some ways complicate the situation the Ryries are dealing with, but ultimately they play an important part of the healing process.

The Grief of Others is not a happy novel. I found it quite sad, yet the story was an important one. Each of the characters seemed believable and sympathetic for different reasons.  The author writes well, but at times I felt the writing was a bit too descriptive given the painful subject matter. But, for all the sadness in this book, the ending left me hopeful. In my opinion, when an author can make that happen without making the ending seem contrived, it's a book worth reading. This book is recommended, as long as you are not feeling depressed when you begin it, and the cover is one of the prettiest ones I've seen in a long time.
Posted by (Diane) Bibliophile By the Sea at 9:58 PM