The End of Your Life Book Club; Will Schwalbe 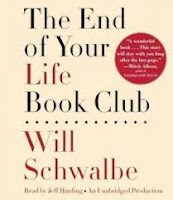 Mary Anne Schwalbe was a well educated woman who lived life to the fullest. She was an educator who loved to travel and she loved to help those in need.  She worked and traveled extensively to places like Liberia,Thailand and Afghanistan to help refugees.

In 2007, after returning home from one of her trips outside of the US, she became ill and extremely fatigued.  After months of  visits to doctors and undergoing various testing, she learned she had pancreatic  cancer. The one cancer for which there is no cure, but one which if caught early enough and treated with chemotherapy / radiation, life can often been extended.  A fighter, she opted for treatment and soon began chemotherapy at Memorial Sloan Kettering outpatient clinic in New York City.

Mary Anne was an avid book lover who had the odd habit of reading the end of the book first.  Her son Will, accompanied his mother to her treatments at the clinic and as a sort of ice-breaker, always asked his mother,  "what are you reading?".  The two, from November 2007 until her death in September of 2009,  engaged in an informal book club , where they shared their passion for books. Their conversions lead to discussions about faith, family and life as well, and  how, our never long enough, time here on earth has meant.

The End of Your Life Book Club is a poignant memoir that left me with a lot to think about.  Mary Anne was truly an amazing woman, and Will a son to be admired.  While some may think that this book would be too depressing to read, I did not see it as that. Instead, I though it was deeply personal, inspiring and beautifully written.  The audio book, read by Jeff Harding was excellent, but I was also glad I had the eGalley as there are many wonderful passages I wanted to reread.

Just some of the books that the two discussed were: Crossing to Safety, Wallace Stegnar; Kite Runner, Hosseini; Suite Francaise, Irene Nemirovsky; Too Much Happiness, Alice Munro; The Last Lecture, Randy Pausch; The Reluctant Fundamentalist, Mohsin Hamid; The Year of Magical Thinking, Joan Didion; The Girl With the Dragon Tattoo, Stieg Larrson; Gilead, Marilynne Robinson; The Lizard Cage, Karen Connelly as well as TS Elliot, poetry and several others as well.

I loved this memoir, and it's one of those special books that will make most of you feel happy you took the time to read it.

Not to be morbid, but whether we are ill or well, perhaps we all should read books with "The End of Life Book Club" in mind.  We just never know when each book we read could very well be our last.  The same concept rang true to me about the people in our lives that we care about -- share your kindness and love for others now, so that those you care about never have to wonder how you feel about them.  Live each day like it was your last.
Posted by (Diane) Bibliophile By the Sea at 9:53 PM