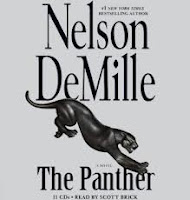 
I've been a long time fan of Nelson DeMille novels.  Although his suspense novels tend to be long, 600+ pages, his chapters are short.  His writing is usually peppered with witty and sarcastic comments which make the reader chuckle, as well as anxious to turn the pages, or in this case listen on -- his audio versions are always a treat. This one was narrated by Scott Brick who always does a fantastic job.

His latest novel, The Panther, features John Corey, an agent for the FBI Joint Terrorism Task Force based in New York City, as well as his wife, Kate Mayfield, an FBI special agent.  The couple have been selected for an assignment and sent to Yemen to track down and capture an Al Qaida operative know as The Panther. He was the terrorist behind the USS Cole bombing, an immigrant who had been living in New Jersey.  That is not all John and Kate need to worry about though, as they are on the terrorists targeted list as well. Corey killed a Libyan terrorist know as The Lion in one of his earlier novels.  His wife Kate, has also been involved in events that make her just as unpopular among terrorists.

There are other intelligence agencies at work as well throughout the novel, some involving secret missions and others unique agendas of their own. One character who made the story all the more interesting was Paul Brenner, an embassy DSS Chief who has also served two tours of duty in Vietnam. Corey and Brenner seemed to feed off one another making for some interesting dialogue and suspense filled thrills along the way.

Although, I enjoyed  this audio version a lot and as well as the eBook, I thought the novel seemed way to long. One of the things that draws me back to DeMille time and time again is his wit and sarcasm, which always makes a commute that more enjoyable when listening to his stories. For some reason the wit and sarcasm seemed to have been over done in this story, and after a while I grew tired of the wise-cracks.  Despite that, I thought the ending was very good and I was happy I took the time to finish this one. I don't feel like it is necessary to read his series novels consecutively, for those interested, the (6) books in the series featuring John Corey are:  Plum Island, The Lion's Game, Night Fall, Wild Fire, The Lion and The Panther. I've read/listened to them all and enjoyed each of them.  If you enjoy audiobooks, I highly recommend listening to these.
Posted by (Diane) Bibliophile By the Sea at 8:14 PM