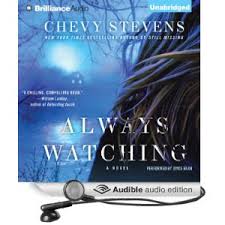 For readers like me who have not read the (2) previous novels by Chevy Stevens, the main character of this novel, Dr. Nadine Lavoie was also a character in the other two books.
Dr. Lavoie is a psychiatrist who has some mental health issues of her own.  She suffers from panic attacks and claustrophobia, but the root of these conditions was never known by her.

One day Nadine is working with Heather Simeon,  a new psychiatric patient who has attempted suicide. Heather shares some disturbing information with Nadine that begins to trigger memories long repressed.  When Nadine was about thirteen, her unstable mother in an effort to escape her husband's violent mood swings, took Nadine and her brother to live at a commune run by a crackpot named Aaron Quinn.  Aaron used mind control over his followers or rather his victims, and although people have left the commune -- Aaron in some ways always seems to be close by.  Although the family eventually left the commune, it's clear that things happened that perhaps were covered up.

The novel also has a subplot about Nadine's daughter Lisa who is a current target of Aaron. Lisa has battled drug issues and has been living on the streets.  Nadine isn't sure where her daughter is or, even if she is still alive.

Readers of psychological thrillers who enjoy a lot of edge of your seat moments, might find themselves a tad disappointed by this effort, but for me it was still a decent read. I enjoyed the set up of the first half of the book, more than the finish. I am looking forward to reading the author's two earlier books, Still Missing and Never Knowing, which Steven's fans have seemed to rave about.
Posted by (Diane) Bibliophile By the Sea at 6:57 AM