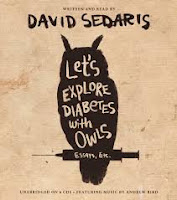 David Sedaris reads his own material, and he always does a wonderful job and many of his essays at times feel like a stand-up comedy act.
In his latest book: Let's Explore Diabetes With Owls, there is actual one essay called Understanding, Understanding Owls, where Sedaris visits a taxidermy shop in London in search of the perfect Valentine's Day gift for his partner.  When he's taken in the "backroom", he gets an education about human mummies that will leave readers in stitches.  There are a few essays where Sedaris shares stories about his dysfunctional childhood, and while he makes the stories sound funny, I felt sadness for the author over the way he was treated by his father.
Some of his stories are a bit crude or gross, like when he describes his trip to China.  I loved when he described his colonoscopy procedure -- been there done that.  I also enjoyed the fact that there was much to laugh about when he gives us his take on politic and political correctness.
There were also some essays which did not work for me or that I did not get the point of. Some seemed rather disjointed, but because there are over 20 essays in this collection, none of them are too long or unbearable. To me, it is Sedaris's sarcasm that makes his material work, but a little goes a long way.  I do recommend his books, and find audio books are the way to go for the most enjoyment.
Overall, this book was good, but given the fact that I've listened to most every book that Sedaris has written, my favorites remain: Naked, and Dress Your Family in Corduroy and Denim.
Posted by (Diane) Bibliophile By the Sea at 12:00 AM