We Need to Talk About Kevin; Lionel Shriver -- - Beware --Spoilers Galore -- Rambling Thoughts on the book and the movie 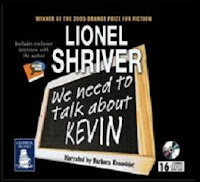 Recorded Books audio book
narrated by Barbara Rosenblat
(excellent)
For those of you who haven't read or watched the movie, We Need to Talk About Kevin, it's a gut-wrenching story that I think will stick with me forever. it is also one of those stories that make you question, what you would do if you were faced with a similar situation. It is a story I will never forget and certainly, I can certainly understand why Lionel Shriver won the Orange Prize in 2005, I highly recommend both if you think you are up for this story.

The novel begins with the narrator, Eva Khatchadourian, mother of Kevin, writing a series of letters to her former husband Franklin. Their son Kevin committed a horrific act a few years earlier, just a few days before his 16th birthday. It is through these letters that the readers get a glimpse into the head of the mother, who never wanted to have a child in the first place -- she admits to this. The reader could easily fill a small notebook with the parenting missteps of both parents -- they made me angry -- very angry, especially the mother Eva.  But, then at times I had to take a step back and question whether there was such a thing as "the bad seed" or is it just bad parenting that creates sociopaths and future killers.

Kevin clearly had issues early on in life, but I never really got a good sense of maternal nurturing going on in this family, especially during those important first 12 months of life.  I'll get off my high horse about Eva's shortcomings and say at times I felt sorry for her to have to deal with all of Kevin's issues alone. How awful that her husband didn't believe the things she told him about Kevin.  Then I got really mad, I had to ask myself, if motherhood was such a horrible experience for Eva from the get-go, why in the world would she have another child?  The two children were not that close in age so why would would Eva think motherhood the second time would be make things better in her life?

In a nutshell - both the book and the movie were gritty and haunting, yet unbelievably brilliant.  I read the book first and as I read I was filled with dread and a sense of impending doom. I I kept asking myself as I listened to the audiobook, what horrible thing would happen next? The movie was terrific as well and each cast member was perfect for their part IMO: Tilda Swinton, John C. Reilly and Ezra Miller.

SPOILERS - How the Book and Movie Differs

Although the book followed the movie pretty closely, there were a few differences. For example, in the book the mother and father actually divorce, but in the movie, they only talk about it.  I also thought that Eva, the mother, at times seemed to try to mother Kevin, whereas in the book, I never felt that for a minute.  Unfortunately, his obsession with archery and Robin Hood, started early -- it was the one book that he allowed his mother to read and read and read to him over and over again.  The biggest difference however, was the fact that in the movie, the father and sister died at the hands of Kevin. ......OMG...today, Aug 12th...my coworker and discussed the book and we disagreed about the ending in the book, versus the movie ending.....so together we read the last chapter of the book (at work...LOL), and she was right....the ending was the same both, but the way Shriver worded one sentence, made me think differently initially.
Posted by (Diane) Bibliophile By the Sea at 8:12 PM

Email ThisBlogThis!Share to TwitterShare to FacebookShare to Pinterest
Labels: books and movies