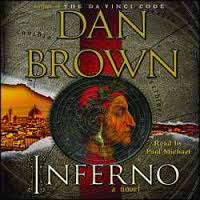 “Nothing is more creative... nor destructive... than a brilliant mind with a purpose.”


Dan Brown's latest book, Inferno, is good but not perfect. Some of the things I liked about it was that the story offered all of the typical elements that make a thriller exciting: interesting characters, unexpected twists and even chase scenes.  I also liked the setting and all of the interesting details of cities like:  Florence and Venice Italy and even Istanbul in Turkey.

The story starts off with some excitement when a famous genetic scientist named Bertrand Zobrist, commits suicide by jumping off a historic building in Florence, Italy.  He had been working in isolation for over two years on a project about curbing population growth, and was just about to try out his plan. Then,also at the very beginning of the novel, Harvard Professor, Robert Langdon wakes up in the hospital with a head injury, after being grazed by a bullet and no memory of what happened in the last 48 hours. He thinks he is in Boston, but he's in Florence as well.

While Langdon is in the hospital, there is a second attempt on his life but the beautiful, Sienna Brooks, a young doctor who treated him in the hospital, help him escape the killer, and the chase begins. Who is trying to kill Langdon and why? Why did Zobrist commit suicide? What was the small canister in Langdon's pocket and where did it come from? Why was there an image from Dante's Inferno on it?

What I liked about the book was that it was fast-paced even though it was nearly 500 pages and over 17 hours of listening time. I liked that the author uses actual historic events to frame the chapters that follow and most of the time, I was anxious to keep listening to find out what would happen next. There were a few slow spots and also a few things that bugged me about the book as well. For example, there were a lot of flashbacks right when something exciting was happening which was very confusing, especially since I was listening and couldn't flip back easily. I also felt like the ending was a bit of a letdown for me, as there was so much action and hype leading up to it.

I think most Dan Brown fans or readers who like action packed thrillers will enjoy this book. The audio version was well done, read by: Paul Michael, but because of the flashbacks, and the way the story rolls out, I think I would suggest reading instead of listening.
Posted by (Diane) Bibliophile By the Sea at 8:42 PM