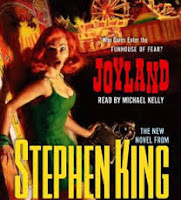 Devin Jones, is a 21 year-old college kid from New Hampshire who is going through a rough time. His girl friend Wendy calls it quits so he decides he needs a change of scenery and something to keep him busy over the summer. He takes a job at a North Carolina, beach community amusement park. It's 1973 and the amusement park run down and barely surviving. No modern or fancy rides, instead it's draw tends to be the kinds of things that we've seen in the movies in years gone by. There's a boardwalk, a few rides and the types of attractions sometimes found at a county fair: a fortune teller, some sexy girls who take pictures of the visitors and then pressure them to buy a photo or take a chance etc.


It doesn't take Devin long to get and make a few friends. He meets a few other college kids who live at the same boarding house and are also working at the amusement park. Together with Tom Kennedy and Erin Cook, the threesome find themselves becoming good friends, doing what teens do. The also find themselves focused on and unsolved murder case of a young girl that happened years earlier in the House of Horrors at Joyland. The girl may be gone but her ghost seems to alive and well. There's also Annie and ten-year old Michael, a boy with MS and is in a wheelchair, who play a significant part in the story.
So is Joyland a horror fest, crime fiction, a murder mystery or ghost story?  Honestly, I suppose it's a little of all of these, except for the horror perhaps -- there wasn't any of that like some of King's other works. The story is narrated by Devin (Dev) some 40 years later and I think that worked well. I liked listening to the 60 year-old Dev, reflect on that impressionable summer he spent at Joyland. King did a great job on his character, and everything about being a college kids in 1973 seemed to feel right. For me, Joyland seemed like a cool coming of age story -- the 70's setting, the colorful characters etc. However, for such a short novel, by King standards, it felt like something was missing.  I listened to the audio version which was well done, read by Michael Kelly. Not perfect, but overall, a decent summer book.
Posted by (Diane) Bibliophile By the Sea at 9:11 PM