Too Bright to Hear Too Loud to See; Juliann Garey 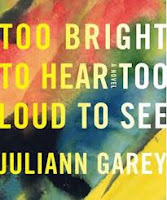 Too Bright to Hear Too Loud to See is a compelling and sometimes even extremely funny story about a man with severe form of bipolar disorder.


Greyson Todd, is a Hollywood studio executive who has made it big. He's smart, confident and painfully self-aware. As the story begins, Greyson leaves his old life behind: leaving his wife, his 8 year-old daughter and his career behind and taking off on a ten year trip around the globe. Of course, for the protagonist, he is on a manic high when he initially made that decision. Staying for periods of time in places like:  Rome, Israel, Chile and even Uganda, he reinvents himself in each place as someone new -- let's try - Lee Majors, and does a whole lot of crazy and risky things in the process.  Eventually things begin to fall apart and he is then off to somewhere new.

The author does a great job of giving the reader a glimpse of Todd's childhood and adolescence, where we learn that his father also suffered from the same condition. Flashing forward we get a look at Greyson's psychiatric hospital stays where he received some 12 electroshock treatments.

Flashbacks work well in this story to depict what life was actually like when someone like Greyson slips into madness, losing grip on all that is real. There are parts of the story where I thought, "OMG, what a total jerk this guy is", and then other times, when I truly felt for him and his situation. There were some times when the story really slowed a bit for me, however, overall, this book was very good. Although a work of fiction, made me understand just how chaotic life must be for someone suffering such a terrible condition.  How difficult it must be to have a relationship and to maintain it, before abandoning it or being abandoned because of it.

The author seemed to know her subject matter, and I thought she did a decent job writing about a tough subject like this.
Posted by (Diane) Bibliophile By the Sea at 7:58 PM