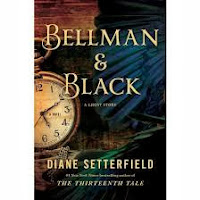 
In Bellman & Black, a foolish incident, a dare from his peers, when he was just 10 years old comes back to haunt William Bellman as an adult.  Young William killed a bird (a rook) with a stone and a slingshot like device. He knew it was wrong and he felt sick afterward, but it was.  too late to change the outcome. The deed was done and the bird was dead, but as we know, all actions have consequences.

The years passed, William grew up and became successful. Ladies found him attractive, he was blessed with good health, a wife and family he loved, and his business savvy has led him to a thriving career at his uncle's business, Bellman Mills, which he eventually takes over.  He seems to have everything going for him until things start to happen and his good fortune seems to change.  Could that unknown, haunting man in "black" who seems to appear at every funeral have something to do with William's downward spiral?  William stands to lose everything precious to him, even his beloved daughter Dora.

I began this novel knowing that many readers expected this to be a "ghost story" and felt disappointed. I found the book slow moving at times, but the author does a terrific job of drawing the reader into William's torment and misery. The writing was atmospheric, and left me anxious to find out what would happen next. I did think that there was a bit too much info about the Industrial Revolution and the family business. Despite that, like Setterfield's debut novel, The Thirteenth Tale, I enjoyed Bellman & Black -- a story that reminded me how one foolish act has the potential of ruining our lives.

Posted by (Diane) Bibliophile By the Sea at 9:28 PM