The Lullaby of Polish Girls; Dagmara Dominczyk
Spiegel & Gru - June 2013
(thanks to the publisher and NetGalley for eGalley access)

I was curious about this book ever since I first heard about it as both sets of my grandparents came to the US from Poland.

The Lullaby of Polish Girls tells the story of three friends who met when they were 12 years-old in Kielce, Poland and formed a special bond.  Although they do lose contact as adults, a devastating tragedy brings them back together. Anna is the most worldly of the group having lived in several different places. She eventually becomes an actress in the US, but her life is anything but perfect. Kamila, is not comfortable in her own skin, she grew up in an abusive home and like Anna has problems with relationships. She is more interested in pleasing others than finding her own happiness. After her marriage fails she leaves Poland for the US.  Finally, there is Justyna, somewhat of a  wild child who never leaves Poland.

The story begin in 2002 and goes back in time to the 1980s.  The girls make a lot of bad choices in life, and as a result, I had hard time engaging with the characters. There is a fair amount of foul language which served no purpose and did not need to be there. At times I thought the story was a bit hard to follow as well because of different name variations from Polish to English.  I did like reading about Poland and wish the sense of place could have been expanded on a bit more.  Overall, this novel was just so so for me. 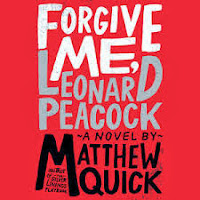 Forgive Me, Leonard Peacock; Matthew Quick
Little Brown & Co and Hachette Audio
(thanks to Hachette for sending and audio copy my way)

Matthew Quick and his Silver Lining Playbook was an instant hit with me, so I was anxious to try this book even though I don't read very much YA.  What a roller-coaster ride; it's a terrific story.

It's a story that is both poignant and heart-breaking. It follows a troubled,teenage boy by the name of Leonard Peacock.  It's Leonard's 18th birthday and he is planning on killing another boy at his school named Asher Beal, who Leonard feels is just plain evil. Tired of the constant bullying, once Asher is dead, he then plans to kill himself.  Before he acts he wants to give a few special people a gift so he won't be forgotten. There's Walt, Leonard's next door neighbor who has taught him an appreciation for Bogart, Baback, a violin prodigy classmate, Herr Silverman, a teacher who shares his knowledge of the Holocaust, and Lauren, a girl Leonard has a crush on.

This book is so well done and full of ups and downs and just so emotional at times as well.  My heart went out to Leonard. Absentee parents: his father was a rock-star wanna-be, and his mother, totally self-absorbed and obsessed with clothes and image. She moves to NYC and leaves Leonard alone in their suburban home, (she says for his own good),so that he can finish high school.

As tough as this story was to read at times, it's a story parents with young kids and teachers should not pass up. So well done, but sorry you'll have to read it for yourself to find out more. READ IT
Posted by (Diane) Bibliophile By the Sea at 5:30 AM

Email ThisBlogThis!Share to TwitterShare to FacebookShare to Pinterest
Labels: eBooks