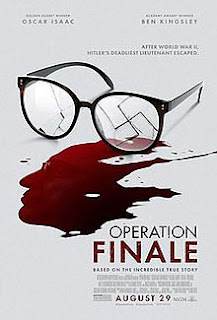 Operation Finale was my husband's pick this month and, although I didn't think I would care for it, I thought it was very well done. Based on true story in 1960, a group of Israeli Mossad spies travel to Argentina and capture Nazi officer, Adolph Eichmann (played by Ben Kingsley) , who was responsible for carrying out some of the most terrible crimes of the Holocaust.  There isn't a lot of action in this movie but, for me, it was a refresher of yet another painful time in history. 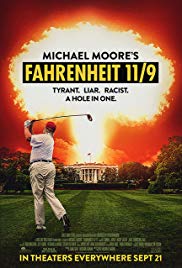 We loved Fahrenheit 11/9. Michael Moore connects the dots and makes sense about our last presidential election. This film is not a total Trump bashing as some might expect. The documentary interviews some had and forgotten Americans and hits the democratic party, including President Obama pretty hard at times as well. There is also time spent of the Flint, MI water poisoning fiasco and coverups, the Parkland shootings and the building momentum of the new grassroots movements in politics today.

In case anyone is interested in knowing more about this film, here is a very good recap by CBS.


Have you seen any movies lately?
Posted by (Diane) Bibliophile By the Sea at 8:38 PM