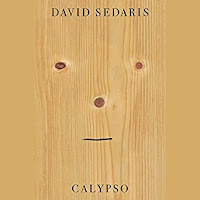 In his latest collection of about (20) essays, best described as dark comedy, David Sedaris is pure entertainment. The focus of these essays is primarily:  family, aging and death, but don't get me wrong, it's never depressing. Here's a brief look at just a few of the offerings.

Sederis and his husband Hugh purchase a seaside vacation home in Emerald Isle, NC, where David's family had vacationed prior to his mother's death at the age of 62 from lung cancer.  The couple looks forward to continued family gatherings in summer and Thanksgiving. He tells of friendship and caregiver experience, bringing food, to a sea turtle that was missing part of its foot and had a tumor on its head. We learn of his strained relationship with his 90+ year old, ultra conservative father, who still lives in a huge house where the family grew up.  We learn about his sisters and there is even an essay where David talks about the suicide of his younger sister Tiffany just before her 50th birthday.

I loved each and every story because as the author strikes the perfect balance of warmth and humor in the personal stories he shares. Although at times the tone was somber, it was never overly so. The audio is read by the 61 year old author himself, so his insight on family and aging sounds so genuine.
If you need a good laugh, be sure to pick this one up, the audio is delightful.
Posted by (Diane) Bibliophile By the Sea at 6:00 PM