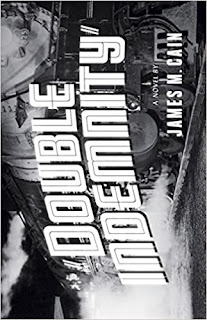 Walter Huff is a decent enough guy, he's single and is an insurance salesmen in Beverly Hills, CA. He is lured into a murder plot by an attractive vixen who is looking to have her husband killed once he purchases and accidental death policy. He meets Phyllis Nirdlinger, the soon to be victim's wife, while making a house call on her husband who is out at the time. The two hit it off and them meet several times to come up with a plan.

The story is told as Walter looks back on how the met Phyllis, how the plot is carried out and how things quickly spiral out of control.

This was a well-craft, murder mystery and just 118 pages. Since it was first written in 1936 some aspects of the story certainly felt dated but, it in no way detracted from my enjoyment of this page turner.

I first learned about this book when I recently read Eight Perfect Murders by Peter Swanson and, I decided to purchase it. I'm glad I did.  I then watched the (1944) film version on TCM starring Fred MacMurray as Walter, Barbara Stanwyck as Phyllis and Edward G. Robinson as Walter's boss.  The movie is slightly different from the book, (Walter's last name is different as was Phyllis's and the ending was different as well). The movie was very enjoyable but, I liked the book a bit better.

This is my first completed book from my Summer Reading List - 2020. 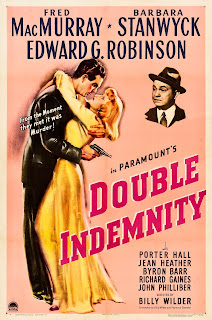 Fred MacMurray and Barbara Stanwyck star in the gripping film noir classic, Double Indemnity, directed by Academy Award winner Billy Wilder. A calculating wife (Stanwyck) encourages her wealthy husband to sign a double indemnity policy proposed by smitten insurance agent Walter Neff (MacMurray). As the would-be lovers plot the unsuspecting husband’s murder, they are pursued by a suspicious claims manager (Edward G. Robinson). It’s a race against time to get away with the perfect crime in this suspenseful masterpiece that was nominated for 7 Academy Awards including Best Picture.
Posted by (Diane) Bibliophile By the Sea at 6:59 PM