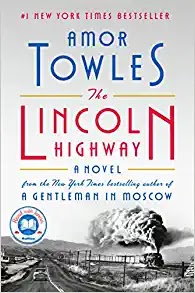 I spent the better part of last week reading and listening to The Lincoln Highway. This is my third book by Amor Towles and IMO, another winner.  I loved the characters, even most of the minor ones were a joy to hear from.

Set in 1954 the story takes place over the course of ten days.  The story begins with 18 year old Emmett Watson being released early from a one year sentence to a work farm in Kansas for an involuntary manslaughter charge.  It was an unfortunate incident that landed Emmett this sentence. Now back in Nebraska, his father has died so it's just Emmett and his eight year old brother Billy. The boy's mother had abandoned Emmett and Billy years earlier.   With their house foreclosed and a few thousand dollars set aside Emmett and Billy plan to start fresh and head along the Lincoln Highway in Emmett's prized Studebaker. Billy has dreams of finding their mother who always looked forward to 4th of July fireworks in Lincoln Park in CA.

Things don't go exactly as they planned when two of Emmett's work farm inmate buddies: Dutchess and Wooly escape and show up to derail those plans.  I thought the road trip alone was time well spent.

All of the major characters here are looking for new start: Emmett and Billy hope to build a new life together, Dutchess would like to have his own restaurant and Wooly would just like to find peace and happiness.  There are several minor characters who left an impression as well (both good and bad) : Sally, a spunky next door neighbor, Ulysses a WWII veteran, the unsavory Pastor John and Professor Abernathe.  The story is told in multiple POVs which really helped to shed light on the past of each character.  I was especially fond of Emmett and Billy.  I admired Emmetts fierce concern and devotion to his smart, intense eight year old brother Billy; Billy won my heart as well. I found the ending both heartbreaking yet hopeful.  Highly recommended.

The audio book production was excellent with a full cast:  Edoardo Ballerini, Dion Graham and Marin Ireland. Although in general I like Marin Ireland as a narrator, I found her slightly annoying in the role of Sally.  This was a combo read/listen - about a 50/50 split.

Here are a few quotes I noted:.

"Wouldn't it been wonderful if everybody's life was a piece in a jigsaw puzzle. Then no one person's life would be an inconvenience to anyone else's.  It would just fit snugly in its very own, specially designed spot, and then in so doing, would enable the whole intricate picture to become complete."

Note: I purchased the print edition of this book and the audio version was provided to me at no cost by the publisher.

Posted by (Diane) Bibliophile By the Sea at 2:52 PM