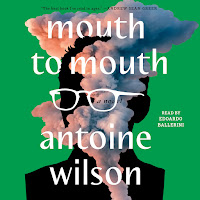 Mouth to Mouth; Antoine Wilson
Simon & Schuster Audio - 2022 and Avid Reader Press
(audio download and eGalley provided by publisher in exchange for my unbiased review)
(Edoardo Ballerini - Narrator - very good - just under 5 hours)
Every once in a while I am drawn to a book that is somewhat unusual.  Initially, it was the cover art and title. The story proved to be different and rather addictive as well - it's a story within a story.
Our unnamed narrator is a struggling cult author who is at JFK airport as the story begins. His flight bound for Berlin is delayed. When he hears a page for a Jeff Cook and then notices the handsome face of a 40-something man with fancy luggage, he's pretty sure it is the same Jeff Cook he knew at UCLA some 20 years earlier.  After a quick conversation, Jeff invites the narrator, who is flying coach, into the First Class lounge with him.  Jeff proceeds to tell the narrator a story that he has never told anyone else. It seems that he saved a drowning man some 20 years earlier. He claims he became obsessed with finding and learning what happened to the victim, Francis Arsenault.  It seems Arsenault became a somewhat devious but successful art dealer in Beverly Hills. Cook continues to tell how when he meets Francis he wasn't recognized by him yet, despite this Francis sees something in Jeff and takes him under his wing, introducing him to the world of art.
Why did Jeff supposedly keep this story to himself this long and, why reveal it at this time to someone he hasn't been in touch with since college?  To say more would lead to spoilers.
This is one of those novels that is hard to stop reading once you begin and because it is just under 200 pages in print and under (5) hours on audio, it is entirely possible to finish it in one day.   This character driven story has a slow build up and a truly unexpected ending as well. The story isn't perfect but, is a doozy. I'm glad I had a chance to read/listen to it.
Rating - 4/5 stars
Posted by (Diane) Bibliophile By the Sea at 7:39 PM