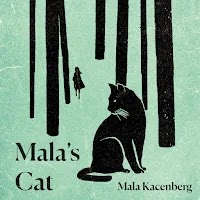 Mala's Cat; A Memoir of Survival in World War II; Mala Kacenberg
Dreamscape Audio and Pegasus Books - 2022
(audio download provided at no cost by publisher and NetGalley)
Mala Szorer, a Jewish girl, grew up in quaint forested village in Poland.  Her family had a good life until WWII began and the German invasion changed everything.  She wasn't even 14 when she witnessed the killing of her older brother and her family by SS men.
Knowing she had to flee the area if she had any chance of surviving, Mala and her cat, Malach, who she truly believed was her guardian angel, fled to find safety. Mala was a strong, smart, blond blue-eyed girl and, the fact that she did not look Jewish worked to her advantage.  With the help of some kind-hearted people along the way she was provided with occasional food and clothing and, eventually she able to pose as a Christian, fake her identity and even find work and shelter.
I loved listening to Mala's story and her nearly (6) year fight to survive.  This book, originally published in 1995 as, Alone in the Forest, was a wonderful and important story.  Unlike many other WWII, Holocaust stories, I did not find this one too dark and depressing despite the subject manner. Mala was a wonderful character, she was so determined with a nothing to lose kind of attitude that worked to her advantage. A beautiful story of survival despite the odds. The audio, narrated by Kristin Atherton, is highly recommended.
Rating - 5/5 stars
Posted by (Diane) Bibliophile By the Sea at 6:12 PM