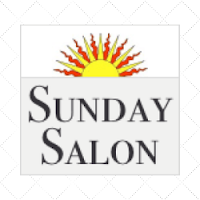 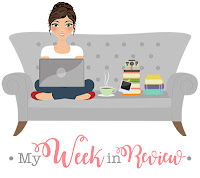 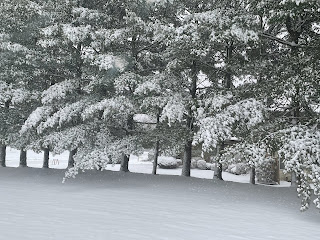 This was a week where I rarely left the house.  I did go to yoga Monday but felt uncomfortable with the raging virus even if we are fully vaccinated. One of our yoga ladies passed away (virus complications) just before New Years (she was older and hadn't been to yoga class since September but, sad to hear about this.) Tuesday (2) of our granddaughters were off from school and mom had meetings so we spent the day playing Boggle, The Game of Life, cards and drawing - very fun. Wednesday was freezing rain - so another good reason to skip yoga and stay home and read. Thursday my husband had a doctor's appointment and I needed to pick up some new eyeglasses and Friday we woke up to 3" of snow.  I  was happy to spend more time at home reading.  I even went so far as to place a large grocery delivery.  I'm still debating whether I will return to yoga tomorrow.
READING - My first week of 2022 was a rewarding one for  books. I was able to finish (3) books - all written by favorite authors.  All of these books were worth spending time with as well. I'm so happy I created a January game plan of (12) books that I really wanted to read or listen to in January.  Given my list isn't set in stone - I seem to do better following some sort of list/plan.  Here is what I read:

Honor; Thrity Umrigar
Algonquin Books - 2022
(arc and eGalley - sent to me by publisher)
Smita Agarwal was born in India but moved to the US with her family when she was a teen. Something happened to her in India and, she never planned on returning to the place of her birth.  Living in NYC and working as a foreign correspondent she is asked by a good friend, also a correspondent, who is hospitalized to come to her aid in India.  It isn't until later that she learns that she won't be helping her friend to heal but, rather covering an important story about a Hindu woman named Meena who was attacked and disfigured by members of her own village after she married  Abdul, a Muslim man.  Abdul was burned to death by Meenas own brothers just four months into their marriage in what was considered to be an "honor killing."
I didn't know much about this story going into it and, although it is very well written and tells an important story, there was a bit too much shocking detail revealed IMO. I realize it is important not to bury the atrocities that happen around the world, I just don't think I was prepared for such a heavy read for my first book of 2022.  Don't get me wrong, there are some lighter moments in the novel but readers should be prepared for some dark plot lines.
Rating - 4/5 stars 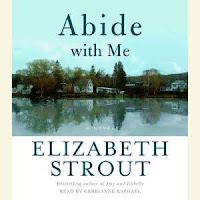 Abide with Me; Elizabeth Strout
Random House Audio - 2006
narrator - Bernadette Dunne - very good
(library download)
One of my 2022 goals was to read any Elizabeth Strout novels I may have missed - there were (2) - Abide with Me and Amy and Isabelle - both were very good stories.
The story takes place in 1959 in the small town of West Annett, Maine where Tyler Caskey is a minister.  West Annett is the kind of town where rumor and speculation sometimes bring out the worst in people and secrets don't stay secrets for long.  As the story begins Tyler is living with his 5-year old daughter Katherine, a troubled girl who rarely speaks except maybe to utter the words that she hates God. Katherine is cared for by his housekeeper Connie. He also has an infant daughter, Jeannie, who lives with Tyler's mother.  What happened to Tyler's wife Lauren, the mother of his children?  Bit by bit the story is revealed.
I loved this quiet, reflective noel. The author does not spell everything out for the reader but yet she does a wonderful job of painting a clear picture for the reader of the good, the bad and the ugliness of the characters.  The reader is left with a reminder of how all of us go through rough times at some point in our lives and just how important it is to help and support those who are struggling.  I liked the flashback to just how different childrearing was in 1959 than the present.  Abide with Me is a quiet, yet deeply affecting read. The audio version was excellent.
Rating - 4.5/5 stars 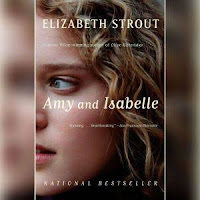 Amy and Isabelle; Elizabeth Strout
Random House Audio - 2013
narrator - Stephanie Roberts - very good
(library download)
The small New England town of Shirley Falls is the setting for Amy and Isabelle - a mother/daughter story.  Isabelle Goodrow and teenage daughter Amy are a twosome. When anyone asks Isabelle about her situation she tells them that both her husband and parents have passed away.  Isabelle works in a small office and keeps to herself, she isn't a part of the office circle and she doesn't date.  Amy is a shy 16 year old protected by her mother to a certain extent. One day Amy's crush on a high school teacher and some sexual experimentation which follows threatens to shatter the mother-daughter bond.
Although primarily a story about Amy & Isabelle, the author has created several memorable secondary characters and has even woven a story about a missing 12-year old girl into the novel to create a mystery feel.  The mother-daughter love/hate relationship was well-written and realistic (those years can sure be trying for mothers and daughters). Amy is a beautiful young woman and Isabelle's resentment over the sacrifices she has made seemed to ring true. I liked when Isabelle finally becomes part of the office circle - those women were fun and their comments resulted in some laughable moments which took away from the mother/daughter tension.  There were some pretty specific sexual visuals but I thought all were tastefully done. I enjoyed this story of mothers/daughters, female friendship and missed opportunities. Another audio book that was very well done.
Rating - 4/5 stars
Coming Week Reading Plans
How was your week? Read any good books?
Posted by (Diane) Bibliophile By the Sea at 2:44 PM