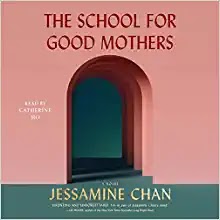 The School for Good Mothers; Jessamine Chan
Simon & Schuster Audio - 2022 (11 hours 56 min.)
(audio download provided at no cost in exchange for my review)
Frida Liu is a 39 year old Chinese American with an Ivy League degree who has a lot on her plate besides working full time.  Her husband Gust left her for a much younger, wealthy woman just three months after their daughter Harriet was born.  The couple has joint custody and as the story opens Harriet is 18 months old.
One day Frida uses bad judgement and leaves Harriet alone as she runs to the office for a file.  Distacted and suffering from insomnia, she also grabs a coffee and then distracted by email,  leaving Harriet alone longer than planned. When her neighbor reports a crying child to the authorities the government intervenes and Frida is sent to a one-year residential program with some 200 others who were deemed unfit or in need of mothering skills.  She must successfully complete this program in hopes of regaining shared custody of Harriet.
The residential program uses robot-like dolls resembling a child and things do not get off to a good start for Frida who is seen as too detached and too passive for starters.  Also, in this residential program, white when are given preferential treatment over other races.  Some of the infractions seemed ridiculous but this, after all,  is a cautionary tale.
This debut novel took a bit to get going and some of the language and imagery felt a bit over the top but, it was though provoking story for sure. What constitutes a "good mother?" Just when should the government and social services intervene?  Should needing anti-depressants be held against a mother in distress? I thought Frida came across as a somewhat flat and rather whiny character who lacked empathy and emotion. I never felt like a champion for her. Although this book wasn't a huge hit with me, I do think it would make a great discussion book. The audio book is narrated by Catherine Ho who did a good job.
Rating - 3.5/5 stars 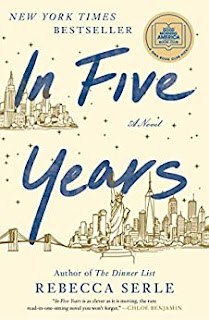 In Five Years; Rebecca Serle
Atria Books - 2020
(library loan) (book group pick)
Dannie Kohan is a 28 year old over achiever and obsessive planner in terms of career and life plan.  The story opens with a big job interview and she anticipates that tonight will be the night that her live-in David will propose to her at the fancy Rainbow Room, a NYC restaurant.  Things do not go exactly as planned for Dannie as when she returns to the apartment she passes out for one hour and she sees herself five years in the future. She is with a handsome man named Aaron and in a different apartment.  When she wakes up she is back with David. She can't stop thinking about this and who was this strange man - was it a dream or premonition?
There is a whole separate storyline with Bella, Dannie's best friend and polar opposite since childhood that propels this story along.  I had no idea where the story was headed and was a bit surprised by the darker turn Bella's story took.
I did think this was a clever story but, it wasn't my kind of book. Although I was pretty sure my book group of older woman would not care for this one,  I was wrong, most of them enjoyed the book and, we all agreed it was a quick read and made for a good discussion.  I thought Dannie was rather shallow - can you really have it all in life without making some sacrifices and disappointing some people along the way?
Rating - 3/5 stars
Posted by (Diane) Bibliophile By the Sea at 11:38 AM