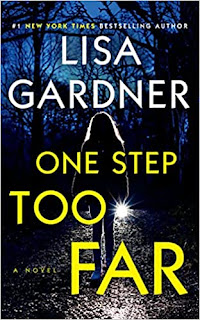 One Step Too Far; Lisa Gardner
Dutton - 2022
(eGalley/NetGalley)
(Book # 2 - Frankie Elkin - Missing Persons Series)
After reading Before She Disappeared last year and loving it, I knew I had to read book #2 of that series which was released last month. I wasn't disappointed. This new one can be read as a stand alone as there is a good amount of information about Frankie Elkin, her past and her obsession with finding people who have gone missing. Instead of a Boston setting we move with Frankie to the Wyoming wilderness.
Frankie Elkin is a recovering alcoholic and a troubled soul who has been roaming the country trying to help locate people who have gone missing.  It's the cold cases that the authorities have all but given up on that call her to action.  Her latest travels brings her to Ramsey, Wyoming where a young man named Tim O'Day had gone missing while he and his buddies were on a bachelor party weekend camping and drinking outing in the national forest five years earlier.  Tim's mother is now dying of cancer and his father Martin, wants one final attempt to find the couple's son.  A party of eight, along with a cadaver dog named Daisy are about to begin what will prove to be a most frightening ordeal. It quickly appears that some of them may not escape this wilderness alive.
From the very first lines of this book I was riveted:

THE FIRST THREE MEN CAME stumbling into town shortly after ten A.M., babbling of dark shapes and eerie screams and their missing buddy Scott and their other buddy Tim, who set out from their campsite before dawn to get help.

Frankie Elkin is a wonderful character, she damaged yet she feels deeply and suffers guilt and remorse over things that have happened in the past.  There are very specific details about wilderness survival, clothing, equipment, things needed in an emergency - all that was fascinating to someone like me who has always made it a point to stay out of the woods.   I loved the dynamics between the characters, most of them have changed and suffered in some way since Tim's disappearance. Frankie is a newbie to this group and, of course, she's an outsider that needs to observe and carefully weigh what she says and does to this group of strangers. Bad things happen deep in these woods and the tension and wonder about who will survive this ordeal and whether Tim or his remains be found was always on my mind as I read.  I thought this book was very good and I loved that this one had an ending that I hadn't thought about as well.  Don't miss this new series.

Posted by (Diane) Bibliophile By the Sea at 7:50 AM