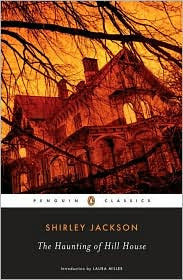 Doctor Montague, is a psychic researcher of sorts, who has rented Hill House for the summer. He invites three strangers to spend a summer somewhere in New England at Hill House. Some seemingly unnatural deaths have occurred there, and the house has a reputation of being haunted. Everything about the house is creepy beginning with its isolated location. Despite this, these individuals come together and agree to report their findings regarding any paranormal activity.

Eleanor Vance is a 32 year old, shy lonely young woman, who has spent much of her last ten years caring for her sick mother who recently died. She is and interesting and very complex character. Eleanor has lead a pretty sheltered life, and little does she know, she is part of an experiment.  On her drive to Hill House she makes up a story about how she lived there at one time.  Once she arrives she soon becomes chatty with the other female of the group, Theodora. Theodora seems to be the polar opposite of Eleanor personality-wise. However, the two seem to get along well together, and Theo helps Eleanor to break out of her shell a bit.  Luke, is the third member of the group. He is a bit of a playboy and Hill House has been in his family. He will one day be Hill House's new owner. Luke is there to more or less watch over the property.  Before long, he comes between the two women, and when this happens the tension and suspense builds with disastrous results.

My Thoughts: Shirley Jackson's writing style is what makes this book terrific. The way she seems to go into Eleanor's mind, and that technique often leaves you wondering if something is real or was it product of Eleanor's imagination. It's a chilling tale, with cool rooms, hammering sounds for no reason, that creates an atmosphere not of gore or real horror, but one that will surely keep you on the edge of your seat, and perhaps biting your nails in the process. The Haunting of Hill House is recommended for anyone who loves a good, creepy, psychological ghost story.
Posted by (Diane) Bibliophile By the Sea at 6:42 PM