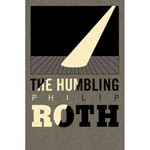 In this latest book by Philip Roth, a mere 140 pages, the reader is introduced to Simon Axler. Simon is an accomplished stage and screen actor, who at the age of 66 finds his life coming apart.  He becomes a failure on the stage, and his wife, a dancer, has left him.  Depressed, he considers suicide, but instead checks himself into a psychiatric hospital.

After Axler's release from the hospital, he retires to his home in the country in New York, and begins an affair with a woman 25 years younger than him who spent the last 17 years as a lesbian.........need I say more??

My Thoughts: A strange novella, about an aging man, his failing career and his sexual escapades with a much much younger woman. Even though this was a short book, I was not exactly enjoying, I HOPED this story in some way was more like Roth's earlier book: Everyman, another story about an aging man, obsessed with regrets about his life ---that book I enjoyed.  Try it for yourself is you are a Roth fan, as long as your expectations are not too high.
Posted by (Diane) Bibliophile By the Sea at 8:46 PM