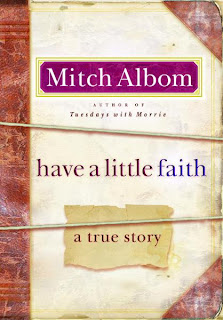 Have a Little Faith: A True Story, by Mitch Albom is a book that I hoped might be an appropriate read this last week, while spending time with my dying brother during his final days.  I was not disappointed.

Mitch Albom was asked to write a eulogy by his childhood Rabbi, Albert Lewis "Reb", when he was 82 years old. To do this Mitch made many visits to the rabbi's home to spend time with him, and his family get to know theme better.

This time spent with the Rabbi gave the author an opportunity to reflect on his own lapsed faith. Although Albom had a religious education, but had pretty much walked away from religion. He was now a Jewish man, married to a Catholic woman.

In the process of these meetings Albom meets a Christian Pastor named Henry Covington.  Covington was an ex-drug dealer who had begun a ministry to the homeless in Detroit. His calling came after a spiritual bargain Covington had made with God when he spared his life. The "I Am My Brother's Keeper" ministry, was a very poor church in Detroit. The church was so poor, the roof leaked and the building itself was decaying badly.  Despite this, Covington showed Albom how lives truly can be reformed when people have faith and hope, and reach for it.

The book was written over a period of eight years, and the only bond between the two religious men was their belief in God. One Christan, one Jew, and their philosophy on life and death, and good and evil.

My Thoughts: I think this book would appeal to both religious and secular individuals. People who were born into faith, have lost faith, or are still searching for something will find this powerful story insightful. From issues of doubting God, the importance of faith in trying times, and why bad things sometimes happen. The book is written in an informal memoir style.  I love the fact that this book was never preachy, but I did find it comforting and inspirational.  RECOMMENDED
Posted by (Diane) Bibliophile By the Sea at 9:27 PM