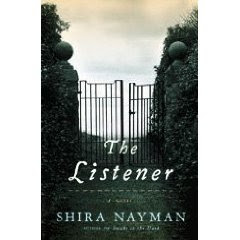 Waiting On Wednesday was created by Jill over at Breaking The Spine. It's a weekly post for you to share what upcoming books you can't wait for!

TWO YEARS AFTER THE END OF WORLD WAR II, a mysterious figure, Bertram Reiner, appears at Shadowbrook, a private asylum whose elegant hallways, vaulted ceilings, and magnificent grounds suggest a country estate more than a psychiatric hospital. At first, the chief psychiatrist -- as genteel as his aristocratic surrounds -- considers his charismatic patient to be a classic, though particularly intriguing, case of war neurosis. But as treatment progresses, Dr. Harrison's sense of clarity clouds over, and he is drawn into Bertram's disquieting preoccupations.

Then, late one night, an intruder is sighted on the hospital grounds, the first in a series of uncanny events that appear to the doctor to be strangely linked; clues abound, yet the truth about Bertram seems always to slip away. Meanwhile, Dr. Harrison's own long-buried troubles reemerge with brutal force. As the careful contours of his existence begin to waver, the doctor is plunged into dangerous, compulsive territory.

When Dr. Harrison finds himself spying on his head nurse, Matilda, even following her one midnight through the underground tunnels that join the hospital buildings, he knows there is no turning back. He is desperate to get to the bottom of the intertwining mysteries connecting Bertram, Matilda, and himself, and senses that everything in his life -- and theirs -- is at stake.

Set against the backdrop of the insanity of war, The Listener explores the havoc historical trauma plays with the psyche, and illuminates the uncertain boundary between sanity and insanity. Shira Nayman's storytelling is mesmerizing. The Listener is a riveting tale of madness, mystery, and passion that excavates the dark corners of the human heart and mind. It is a work of rare depth and power.

What's on your WOW list?
Posted by (Diane) Bibliophile By the Sea at 12:08 AM