(Sent to me by a dear friend; this made my day. Hope it puts a smile on your face as well).

Seemingly unaware of the beast towering over it, the tiny rodent grabbed at  scraps of meat thrown into the African Leopard's enclosure. But instead of  pouncing on the tiny intruder, the 2-year-old leopard Sheena kept her  distance.  After a few minutes she tried to nudge the mouse away with her  nose, but the determined little guy kept chewing away until he was full. 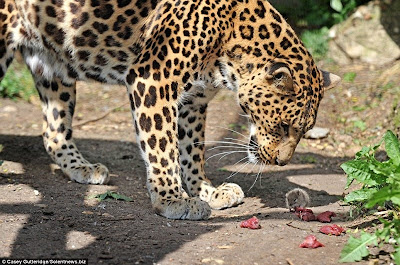 The extraordinary scene was captured by photography student Casey Gutteridge at the Santago Rare Leopard Project in Hertfordshire, England .  The 19-year-old, photographing the leopard for a course project, was astounded by the mouse's behavior.

He said had no idea where the mouse came from.  He just appeared after the keeper had dropped in the meat for the leopard. Taking no notice of the leopard, the mouse went straight over to the meat and started eating. 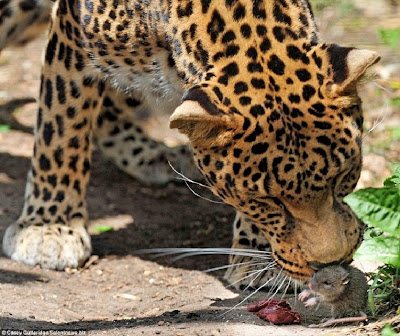 Even when the leopard bent down and sniffed him, the mouse just carried on eating like nothing had happened. Even the keeper said he'd never seen anything like it before. 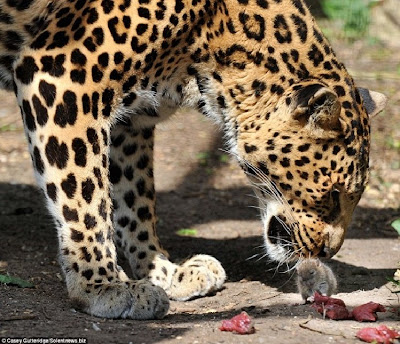 Project owner Jackie James added: “It was so funny to see - Sheena batted the mouse a couple of times to try to get it away from her food. But the determined  little thing took no notice and just carried on.”

The mouse continued to eat the leopard's lunch and showed the leopard who was boss.  We can only assume that Casey received a grade of A on his project!

Posted by (Diane) Bibliophile By the Sea at 8:25 PM