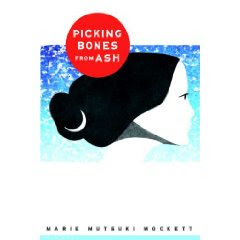 Picking Bones From Ash is a stunning debut novel, about three generations of women living in Japan and the United States from just after WWII through the present day.  Satomi, is a young girl growing up in the 1950's in a small Japanese village with her beautiful," single mother who owns a local pub. No one seems to know who the little girl's father is.  The other women of the village are jealous of the mother's beauty and cruel to both mother and daughter, banning the two from the public bath.

Satomi's mother tells her daughter that she is a moon princess. She teaches her about fine objects and the importance of talent.

"My mother always told me that there is only one way a woman can be truly safe in this world. And that is to be fiercely, inarguably and masterfully talented."

Fortunately for Satomi, she does have natural talent. She is a talented piano player who gains some well deserved respect among from the village people. When Satomi grows up, she goes to Paris, France to study music. Her interactions with men seem to leave her unsure about who she can really trust. Later she has a daughter (part American) of her own.

While the focus of the first half of the book is on Satomi and her mother, the second half shifts to the US (San Francisco).  In San Francisco, the focus is on Rumi, the daughter of Satomi, who lives with her father.

Part historical family saga, part coming of age story, part mystery/ghost story, Picking Bones From Ash was wonderful. We see the consequences of family secrets, what does and does not get revealed about us to our children, how those decisions affect us later on in life. In some ways this story reminded me of Amy Tan's stories: The Joy Luck Club, The Bonesetter's Daughter, two novels which I loved. An amazing story, Marie Mockett's debut novel had all of the elements I love in a great story. The story had great character development, beautiful writing style, and I loved the way the story which depicted the emotional strength of women. This book would make a great book club discussion selection, in my opinion. This novel is highly recommended.