The Invisible Ones; Stef Penney 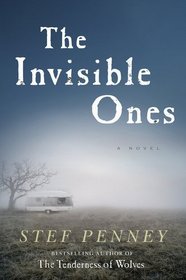 Some of you may recall that a few weeks ago I quoted an intro from Stef Penney's new novel, The Invisible Ones.  It was one that really made me curious for more....(here it is again in case you missed it):


St. Luke's Hospital
"When I woke up, I remembered nothing--apart from one thing.  And little enough of that:  I remember that I was lying on my back while the woman was straddling me, grinding her hips against mine,  I have a feeling it was embarrassingly quick; but then, it had been a while.  The thing is, I remember how it felt, but not what anything looked like.  When I try to picture her face, I can't.  When I try to picture the surroundings, I can't.  I can't picture anything at all.  I try; I try really hard, because I'm worried.

After some time, one thing comes back to me: the taste of ashes."

In this unusual mystery, set in the 80s, Ray Lovell is a private investigator who finds himself in the situation quoted above.  Ray, because of his gypsy descent, has been hired by Leon Wood, to help find his daughter Rose, who went missing seven years earlier after marrying Ivo Janko.  Leon is a gypsy himself, who does not trust the authorities, and thinks Lovell, is the one who can help find Rose. The Janko family is a tight knit family of gypsies who keep to themselves. After Rose disappeared, no one bothered to even notify authorities, so Leon is suspecting that she may have been a victim of foul play. The Jankos think she ran off with someone else, and have hoped to have seen the last of her.

The story alternates between two narratives, Ray, the investigator, and JJ (Jimmy Janko) a 14-year old who is concerned about his uncle Ivo.  JJ is also concerned about little Christo, Ivo's young son who is suffering from a rare disease, that has stricken other male members of theJanko family, including Ivo when he was a young child.

PI Lovell has his work cut out for him, as there is plenty of misinformation which he needs to dissect, and plenty of twists and turns along the way,.  The secrets are plentiful in the story, so even though the plot line moved slowly at times, I was sucked in early and anxious to find out what was actually going on.

I cannot recall ever reading a mystery quite like this one.  It was interesting to find out about the gypsy culture, and the author really did a good job in this respect.  Readers who enjoy a good mystery that will keep you wondering until the end should enjoy this book. I was totally taken by surprise with the ending.