The Sense of an Ending; Julian Barnes 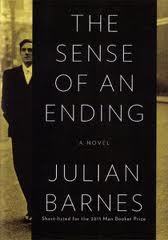 
In this story, the protagonist is an average guy; he's Tony Webster. Sixty-something, divorced, retired, and living a comfortable and somewhat unremarkable life near London..  The story covers two periods of Tony's life. One period was 40 years earlier (1960s) when he was attending a private school outside of London. At that time, he briefly dated a girl named Veronica Ford, who was clearly out of his league. At school, he was also part of a circle of young men, which included the enigmatic Adrian Finn.  When Tony and Veronica split up, Adian and Veronica become an item. School ends and the group goes their separate ways, and for the next 40 years Tony really hadn't thought about any of them.

Flash forward to the present and Tony learns that Veronica's mother has died and has made him an unusual bequest: money and the diary of his dead friend. It is this that causes Tony's mind to travel back to his younger days.  He tracks down old  friends, and before soon uncovers secrets to the past that makes him reevaluate his life and his relationships with others.

Some of the passages that resonated with me:

"remembering isn't always the same as what you have witnessed"

"It strikes me that this maybe one of the differences between youth and age: when you are young, we invent different futures for ourselves; when we are old, when invent different pasts for others."

"How often do we tell our own life story? How often do we adjust, embellish, make sly cuts? and the longer life goes on, the fewer are those around us to challenge our account, to remind us that our life is not our life, merely the story we have told about our life. Told to others, but --mainly -- to ourselves."

" Sometimes I think that the purpose of life is to reconcile us to its eventual loss by wearing us down, by proving, however, long it takes, that life isn't all that its cracked up to be."

The Sense of an Ending, winner of the 2011 Man Booker Prize, is a short novel (fewer than 160 pages) that packs a punch.  The writing is simply gorgeous, and it tackles one of my favorite themes and plot techniques, the human condition and the reliability of our distant memory.  This is one of those stories that after you turn the final page, you may have several unanswered questions.  It may even cause you to reread some of the sections a second time -- it did me, but in the end, I felt it was well worth it. It's thought-provoking and literary fiction at its finest. I loved this one.

Posted by (Diane) Bibliophile By the Sea at 8:15 PM