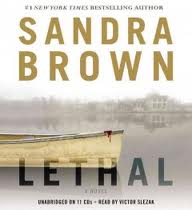 Honor Gillette is a widow.  Her husband Eddie was a police officer, who was killed in a suspicious  automobile accident.  Two years later, Honor is trying to resume some since of normalcy in her life. Her little girl Emily is now 4 years-old.  As the story opens, Honor and Emily have been baking cupcakes at their isolated home located somewhere near the Louisiana Bayou.   Emily tells her mother that she sees a sick man in their yard. When Honor goes outside to check it out, she finds a dirty and injured man lying on the ground in the bushes.  When she tries to help, he grabs her at gunpoint and forces her into the house, holding her and little Emily as hostages.

The man is Lee Coburn and he is wanted by the police and suspected of killing seven people the night before where he worked.  Coburn didn't just show up at Honor's house by chance either. He seems to believe that her late husband Eddie, hid something in the house which he is desperate to find.  While carefully watching Honor's every move, he begins to tear the house apart in search of that "something".  Honor has no idea what her husband might have hidden or why Coburn is so insistent about finding it.  At the same time, there is a manhunt going on for Coburn.

Initially, Coburn comes across as a man you wouldn't want to cross or try to escape from. However, towards the end of the book, he seems to soften a bit and there is some romantic tension in the air as well.  Little Emily is so sweet and innocent. She offers Coburn cupcakes and begins to ask him lots of questions, which seemed perfect pitched for a precocious 4 year-old.  The audio version was excellent as the reader, Victor Slezak was terrific and he did a great job with the voices, including capturing a perfect-pitch, believable voice of  little Emily.

Without giving away too much about the plot, I'll just say this suspense thriller has a little bit of everything in it. There is corruption, bad cops, good cops and plot twists along the way. There's more to Coburn than what we are first led to believe as well, and before long it seems as if Coburn may be the only person Honor and her daughter can really trust.

I liked this audio book a lot, especially since the reader was so good, but I was let down by the way the story ended.  Despite that, it's still a fast paced story and fun to listen to as well.
Posted by (Diane) Bibliophile By the Sea at 9:30 PM