The Book of Jonas; Stephen Dau 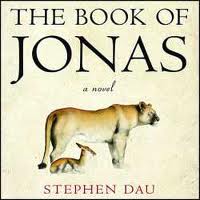 
The Book of Jonas, is an often painful story, about the trauma left behind in the aftermath of war.  The war, presumed to the Iraq war, is subject of this debut novel.
Younis, is a teenage Muslim boy who survives, when his village is destroyed, and his family killed in a military operation that did not go as planned.  An orphan, he is sent to the US (Pittsburgh) to live with an American family, and his name is changed to Jonas.  He's very very smart, but finding it hard to adjust to his new life. Sick of being picked on in school, Jonas eventually retaliates. To help him with his anger issues, he is sent to a therapist, and ever so slowly, bit by bit,  pieces of his painful past begin to emerge.
Jonas uses alcohol as a way of helping him deal with the nightmares from his past and the horrors of the war. However, he is not the only one affected by the war. Chris Henderson is an American soldier serving in the Army in Iraq at the same time whose life intersects with Jonas. He is a soldier who feels deep remorse for what he has been a party to.  He ultimately is the one who saved Jonas' life, but then he goes missing.  Through the soldier's diary entries the reader learns what Chris has experienced and that he is no doubt suffering from post-traumatic stress disorder (PTSD).  The ending is one that I did not anticipate.
Although it is at times a gut-wrenching read, the story gives the reader a good look at the tragic consequences of both sides of war. I was happy I listened to this book, Simon Vance did a great job as narrator, even though it was a little tough to follow at times because the story went back and forth in time.  Despite this it's and audio book that is recommended.
Posted by (Diane) Bibliophile By the Sea at 8:45 PM