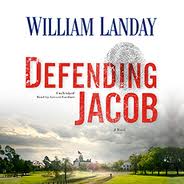 I had a feeling I was going to enjoy this legal thriller, as it was written by a former District Attorney in Massachusetts.  It's a good one; it's thought provoking, engrossing, and every parents worst nightmare.

In a small Massachusetts town, a young boy is found murdered in the woods. How could something so brutal happen in this previously quiet community? Initially a pedophile is suspected, but soon, another classmate, fourteen-year old Jacob Barber, the only child of well respected district attorney, Andy Barber, is a person of interest and eventually charged with his classmate's murder.  Jacob admits to finding the body in the woods, touching the body, but being afraid to tell anyone about it.  Andy and his wife Laurie find it hard to believe that their could ever be capable of such an act, but yet at times they wonder if it could be true. Jacob's is a sullen boy, often moody and withdrawn and full of secrets. The fact he has posted things on Facebook that could be used against him, will not help in proving his innocence.  The family is from a nice suburban town, and is shamed and shunned by the community. Their 20-year marriage begins to come apart at the seams.

The story rolled out a bit too slowly, and began with a grand jury investigation. The reader is not really sure of  what is going on,  or even all of the details for a while.  Once the story gets going though, it was totally addictive.  I listened to the audio version as well as reading the eBook, and even my husband got hooked on it as we drove to Boston and listened.  We still keep talking about the prosecutor's name, as it was very unusual, and just seems to have attached itself to our brains....Neil (sounds like Lajewdis), after hearing it so many time on audio.

The audio book reader, Grover Gardner was excellent, and the ending blew us away.  It's a good story complete with secrets, family skeletons and one story that begs the reader to examine just how far you might go to protect your family.