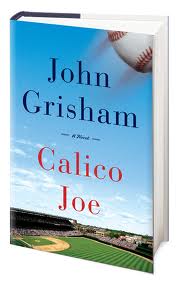 Paul Tracey, the estranged son of former NY Mets relief pitcher, Warren Tracey. Paul receives a phone call from his father's latest wife, (he's had many), to say that Warren is dying of pancreatic cancer.  The story then flashes back to Paul's childhood days, around the age of eleven. It tells of Paul's early love of baseball back in 1973, and the time he spent collecting secret scrapbooks, and watching his cold and distant father perform on the pitchers mound.

Joe Castle (AKA Calico Joe) was the greatest rookie ever known and was a favorite player of Pauls. Calico Joe was an unassuming young man from Calico Rock, Arkansas, who is called up from the minors to play with the Chicago Cubs. From the get-go he hit home run after home run, and Cubs fans couldn't believe their eyes. He quickly shatters previous rookie stats, and becomes an idol in the eyes of the fans everywhere. Calico Joe's career is cut short by something that Paul's father, a jealous, second-rate pitcher did. Fans everywhere are devastated.  The incident changes Paul's feelings about his father, leaving him embarrassed and disappointed in his father.

Flash forward, when Paul learns that his father is dying, he has an idea, about how his father can make amends about what had happened 30 years earlier. In the process Paul learns some things about his father's past that he never knew.

Being a big fan of baseball, Calico Joe appealed to me.  It was quick and easy read, somewhat predictable, but still worth the time I invested.  I think this book would make a good "father's day" gift for dads who enjoy baseball.
Posted by (Diane) Bibliophile By the Sea at 10:09 PM