Still on my quest for the perfect young children's books,  I wanted to share some recent finds. 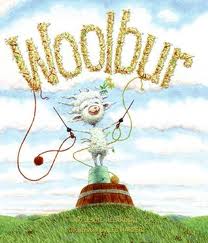 A sweet book with an important message -- It is okay to be different!

Woolbur is the cutest little sheep who loves trying new and different things, His Maa and Paa worry about him, but Grandpaa tells them not to worry. He likes to run with the wild dogs; he doesn't want to have his wool sheared; he tried to card his own wool which made him look kind of funny, but he liked the way he looked all the same.  He also finds out riding on the spinning wheel instead of spinning the wool is a lot more fun.  These things along with many more funny antics cause Woolbur's Maa and Paa to become concerned.  They take him aside and have a talk, telling him,  "you must follow the flock--it's what sheep do", but Woolbur has a better idea, he taught the flock to do as he did and becomes a leader not a follower.

Knitters will love this, but even if you're like me and don't knit, it's a great book, full of colorful and imaginative illustrations and most of all an important message. RECOMMENDED 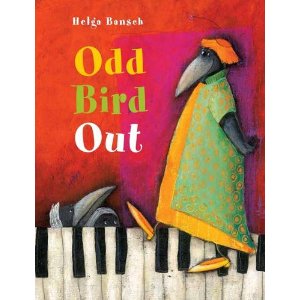 Another cute book about being different!

On concert night he dressed in bold colors, looking somewhat like a parrot. The other ravens asked him to leave. Robert was so sad because of this, he flew far away. When he grew tired he landed in a tree and sang himself to sleep. In the morning he found lots of colorful birds cheering him. The obviously enjoyed having Robert there.   Back home, the ravens were surprised that things seemed less happy and the world  a bit empty with Robert gone.  These birds learned an important lesson, because as new birds arrived they became more patient and tolerant to those who were a bit different.

I was reminded of Jimmy Buffet "Parrot Heads" as I read this book. The colorful illustrations are awesome. An important message as well. RECOMMENDED 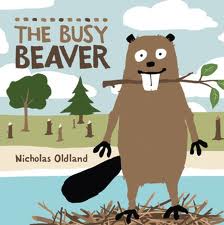 A Book about being considerate to others and about caring for the environment.

Busy Beaver was also busy, BUT he was also, careless and messy.  His dams leaked, he left trees half-chewed, and once he even topped a tree on a bear's head, and chewed the leg of a moose, thinking it was a tree.  He made the birds leave their homes as he felled their nests to the ground, not even realizing the problems he was causing.

One day his carelessness landed him in the hospital with some nasty injuries when he made a tree fall -- this time on top of himself.  While he was recuperating in the hospital, he had a chance to see from his window all the injuries and mess he caused for his "forest friends".  He practiced saying "I am sorry" while in the hospital.  When the other animals saw him later in the forest, frightened they ran away.  He found a way to apologize, to clean up his messes, and planted new saplings to make up for the trees he destroyed.

Such a beautifully illustrated book; the colors are so beautiful and visually pleasing.  I really loved this one a lot. HIGHLY RECOMMENDED.
Posted by (Diane) Bibliophile By the Sea at 10:06 PM