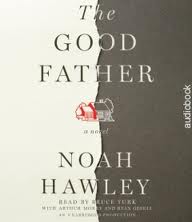 
The Good Father, by Noah Hawley, reminded me of another book I just finished called Defending Jacob.  It is another story, a father who questions what constitutes one being a "good father", and whether he could have prevented his son from doing what he did.

The story is told from the POV of the father, Paul Allen,  successful Chief of Rheumatology at a prestigious NYC hospital. Paul is happily married to his second wife Fran, and the couple has young twin sons.   His first marriage took place when he was much younger when Ellen had become pregnant with their son Daniel.  Ellen was somewhat of a ditz, and the marriage ended when Daniel was just starting school.  Although he tried to stay involved in Daniel's life, Daniel felt like he never fit into Paul's new life and new family, and as a result, they began seeing less and less of one another.

Paul's peaceful life, begins to fall apart when one evening over dinner, he learns that his son Daniel (a.k.a. Carter Allen Cash) has been accused of shooting and killing a leading presidential candidate. A candidate that Daniel had once worked for.  Paul cannot believe that his son could be capable of such a thing and is experiencing a deep sense of denial.

The remainder of the novel has Paul trying to understand what might have made his son possibly become another name like other political assassins who have been in the news over the years. Paul sets out to understand what has happened in Daniel's childhood, teen years and young adulthood that could have attributed to what he has been accused of.  Of course, he questions his lack of involvement in his life, and even wonders about whether genetics have played a part in the person Daniel has become.

Although I enjoyed the audio book, the (3) readers: Bruce Turk, Arthur Morey and Ryan Gesell were all good, the story itself did not wow me.  Where as Defending Jacob, by William Landay, kept me guessing from beginning to end, this book did not.  I also did not enjoy the detailed analysis into the background of other political assassins in US history. Despite these criticisms, The Good Father is still a decent book, because it is an interesting examination of  father and son relationships.  It is also a story that makes the reader realize that no matter how smoothly things seem to be going in our lives for us at times,  all that can change, for any one of us in an instant.

Posted by (Diane) Bibliophile By the Sea at 9:36 PM