A Banquet of Consequences; Elizabeth George 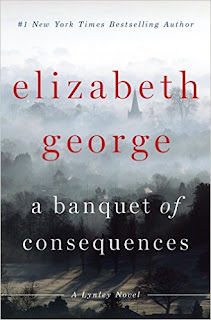 A Banquet of Consequences is book #19 in the Inspector Lynley series but, it's the first Elizabeth George book that I've read.

The story plays out over a period of 39 months. At the heart of the mystery is the suicide of William Goldacre who jumped off a cliff in Dorset, and the death of Claire Abbott, an outspoken feminist author, from Cambridge, who appeared to have a heart attack but, may have been poisoned.

There is plenty everything in this nearly 600+ mystery,  plenty of family dysfunction and plenty of  characters, and, all is not what it appears at first glance.  The author develops her characters over time and many turn out to be much more complex than they first appear. The dialogue between characters is interesting and even funny at times.  I thought the story was longer than it needed to be and it took a while to get going. As an Elizabeth George newbie, I felt disadvantaged by not knowing the backstory of several of the series characters and, in addition, there were several sub stories and lots of characters to keep track of, making this somewhat of a frustrating read for me. I did like the way the author writes but, I'd definitely recommend reading this series in order.