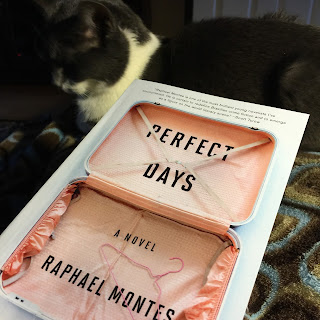 
Teo Avelar is an emotionless loner and the twisted protagonist of Perfect Days. He's a medical student whose idea of a good time is working with cadavers.  He lives in Rio de Janeiro with his wheelchair bound mother and her dog.  In the first few pages of this novel the reader gets a glimpse of just how creepy and disturbed Teo is -

"He could have arranged for her to take a bath in formaldehyde--just to see the look of desperation in her eyes as she felt her skin drying out.  But what he really wanted to do was kill her.  And then paint her pale little nails red.

Of course he wasn't going to do anything of that sort.  He wasn't a murder.  He wasn't a monster.  As a child, he had spent many a sleepless night staring at his shaking hands, trying to decipher his own thoughts.  He felt like a monster.  He didn't like anyone, labor affection for anyone, or miss anyone: he just lived.  People would come along, and he would be forced to live alongside them.  Worse: he was supposed to like them, to demonstrate affection.  He learned that if his playacting seemed real, it was all a lot easier."


One day Teo's mother urges him to go to a party where he meets Clarice Lispector. Clarice is Teo's polar opposite -- outgoing and confident. She's an art history student but her real interest is writing screenplays.  She's working on one called, "Perfect Days" which is about friends traveling across Brazil in search of romance.  Before the party is over Teo is already obsessed with Clarice, and is determined to find out all he can about her.  However, when Clarice runs into Teo again soon after the party, she tells him to "f-off" and to stop stalking her.  She pulls no punches telling him she knows he's been calling and checking up on her. Teo, however, is not deterred, he knows that Clarice just needs sometime to get to know him and then she will fall in love with him.  He hatches a plan to drug her, kidnap her, and to travel with her through Brazil just like in her screenplay. In his mind, it's a plan that can't fail, but in reality it's a journey that just grows darker and more disturbed as it plays out.

This was a deliciously creepy nail biter of a novel that starts out with a bang.  It had me quickly turning the pages and thinking about the Norman Bates, Psycho character and the Kathy Bates character in Misery.  I really enjoyed this psycho-thriller but, it wasn't perfect. Midway through the story it began to feel unrealistic and lost a little steam.  Despite this, I would still recommend this one to readers who enjoy detailed character studies of "nut-jobs", because Teo definitely fits the bill. The ending made me smile.

Perfect Days was a translated work, the author is Brazilian. The translation was very well done.