Week in Review and New Books 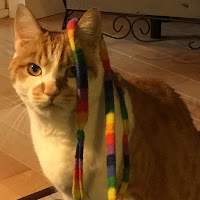 Hello readers, I must say I'm feeling very thankful this Sunday. That horrible snowstorm that hit the East coast missed us for the most part (just a dusting) although we did have 40 mph winds.  I guess we paid our dues last year when we got buried several times.  I do hope that all of you affected by the storm are now safe and sound. 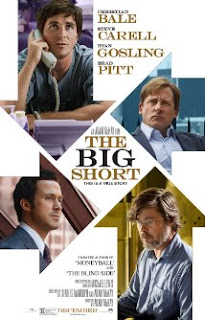 The film based on the book by Michael Lewis which details the fall of Wall Street in 2008 and the circumstances that led up to it. Fantastic cast including Ryan Gosling, Steve Carell, Christian Bale and Brad Pitt. Christian Bale’s character and 3 others find out that bundled mortgages loaded with bad debt/sub prime mortgages - no income verification mortgages etc., are being sold by Wall Street firms to their investors. Many of these mortgages were interest only and other low interest loans for the first few years and then scheduled to soar to much higher rates between 2007-2008 which would cause many monthly mortgage payments to jump 200-300%.

Told from the perspectives of different investors who were able to take advantage of the situation by figuring out what was going on beforehand and by short selling the loans that the huge investment banks were re-bundling along with a few good loans. The movie is presented in a way that makes the disastrous housing market crash so much easier to understand. Be sure to SEE IT! 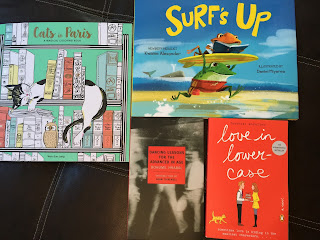 I was pleasantly surprised when I took a break from coloring (yes coloring) to get the mail yesterday and there was a beautiful new coloring book from Watson Guptill called Cats in Paris. This book is beautiful and just how did they know I loved cats? LOL

Have a nice upcoming week everyone.
Posted by (Diane) Bibliophile By the Sea at 12:40 PM