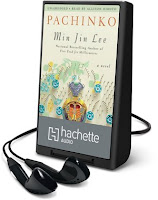 
Pachinko is a sprawling family saga that spans 5 generations from 1910 through 1989.

Sunja is the only daughter of a widow who runs a boarding house in a small fishing village in Korea. Still a teen, Sunja learns she is pregnant by Kohhansu, a successful business man. What she didn't realize was that he was a married man with a wife and children back in Japan.  He tells her he cannot marry her but is willing to care for her and the child. Angry that about his lies, she refuses his help, fully aware of the shame she will face as an unwed mother. When a kind, but ill, pastor asks her to marry him, she moves to Japan to begin a new chapter of her life.

This story is large in scope with a fairly large number of characters as well but, the story is told in a way that really drew me in from the very start and held my interest throughout. Beautifully written, very human characters and with themes such as: discrimination, poverty, sacrifice and the consequences of war, I really loved this one. The many characters required concentration while listening to this story.

Allison Hirto did an excellent job narrating this audio. This would make a fabulous book club choice as there is plenty to discuss.Highly recommended.

I started this short book late in 2018 but I found it too sad at the time so I never finished it. I remembered that writing was very good and it was only (200 pp) and, since I did commit to reading it I gave it another go last weekend.

Nahid is a very angry 50 year old woman diagnosed with stage 4, ovarian cancer; she's been given less than 6 months to live.  As she looks back on her life growing up in Iran, it's clear she has reasons to be angry. She was married off at age 9, pregnant at age 12, and the mother of 7 by age 37. She was an activist, a revolutionary and later was a refugee living in Sweden.

The story opens with Aram, Nahid's daughter, pregnant with her first child and dealing with the loss of her father, the man who Nahid was divorced from.  Unfortunately, Aram is the recipient of much of her mother's often misplaced anger.

I wanted to feel for Nahid given all that she had been through but found it hard to do so even though as I read I began to understand her regrets and why she was the way she was. This was just a tough novel for me and I think I couldn't appreciate the story more because it was so sad.
Posted by (Diane) Bibliophile By the Sea at 6:00 PM