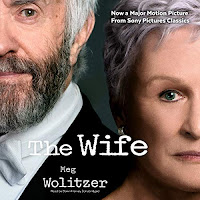 The Wife is the story of a 40 year marriage that plays out over just 4 days.

Joe and Joan Castleman met in 1956 when Joan was a Smith College student and Joe was a literature professor there.  Joe was married at the time but, he was the kind of man who loved the pretty girls and they had a hard time resisting him as well. The two hook up, marry and Joan gives up her dreams of becoming a writer for marriage and motherhood.  Joe, according to Joan, was "one of those men who owned the world."

As the novel opens the couple are bound for Finland where Joe is to be awarded the prestigious Helsinki Prize for Literature. Joan is steaming, sick of taking a back seat to Joe and deciding she has had just about enough of this marriage.  Over a 4 day period, told through Joan's POV, we see flashbacks of their married life.

This is not a terribly long book, 8 hours on audio and approx. 225 pages, I loved the way the story's told and how it played out. It's a terrific character study with sometimes witty and sarcastic characterizations about being married to a womanizer and a narcissist. I really liked it and want to see the movie now. The audio was marred by Dawn Harvey who did a great job with the voice of the disgruntled Joan.

I loved this intro paragraph ....

THE MOMENT I decided to leave him, the moment I thought, enough, we were thirty-five thousand feet above the ocean, hurtling forward but giving the illusion of stillness and tranquility. Just like our marriage, I could have said, but why ruin everything right now? Here we were in first-class splendor, tentatively separated from anxiety; there was no turbulence and the sky was bright, and somewhere among us, possibly, sat an air marshal in dull traveler’s disguise, perhaps picking at a little dish of oily nuts or captivated by the zombie prose of the in-flight magazine. Drinks had already been served before takeoff, and we were both frankly bombed, our mouths half open, our heads tipped back. Women in uniform carried baskets up and down the aisles like a sexualized fleet of Red Riding Hoods.
Posted by (Diane) Bibliophile By the Sea at 8:33 AM